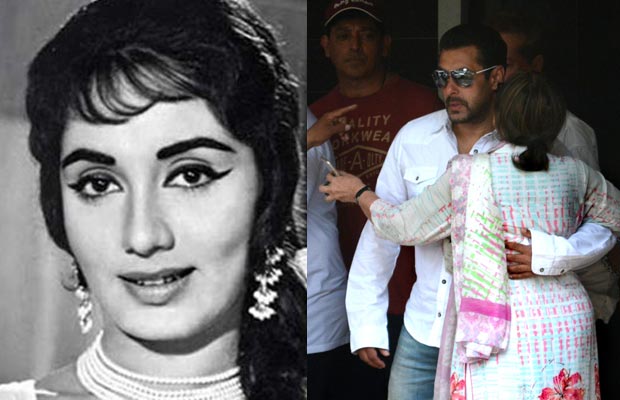 [tps_footer]The evergreen and yesteryear actress Sadhana Shivdasani who was one of the top stars in the 1960s and the early 1970s, passed away at the age of 74 on Friday morning at her residence and was admitted at  Hinduja hospital a day ago. Reportedly, the cremation will take place tomorrowfrom her Santacruz residence.

The veteran actress was suffering from a tumour last year and even underwent for a successful surgery for the same. But recently she was severely ill and was down with fever before she took last breath today morning.

Reportedly, the legendary actress was known to spend much of time with her Bollywood friends from her time. Veteran actresses, Waheeda Rehman, Helen and few others were known to be close to her. According to the reports, Waheeda Rehman, Helen and Shaina NC are on their way to the veteran’s residence in Santacruz west, Mumbai. Also, Salman Khan’s family who is known to be close to her, are reaching at her place any time now.

The legendary actress featured in many successful Hindi films such as Parakh, Asli-Naqli, Ek Musafir Ek Hasina, Mere Mehboob,  Mera Saaya, Intaquam, Ek Phool Do Mali, and Geeta Mera Naam and many more to name. Sadhana Shivdasani introduced the fringe hairstlye in Indian film industry in her first film Love in Simla. He fringe cut hairstyle inspired people to follow her during her time and even now her hairstyle is known as ‘Shadhana cut’.

Sadhana aspired to be an actress since childhood. Her father helped her enter films. In 1955 she played a chorus girl in the song “Mur mur ke na dekh mur mur ke” in Raj Kapoor’s Shree 420.

May her soul rest in peace.[/tps_footer]