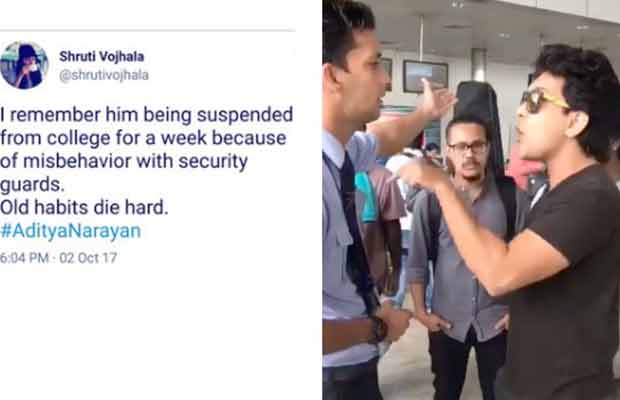 Aditya Narayan has fallen into a controversy after bad mouthing a Indigo Airline ground staff!

It happened on October 2 at Raipur airport where one of the ground staffs of Indigo airline stopped Aditya Narayan. The celeb was allegedly asked to pay for the extra luggage that he was carrying. But Aditya insisted on paying only Rs 10,000 instead of Rs 13,000.

While the two of them got engaged in a fight, Aditya was filmed bad mouthing the staff. And the video has gone viral after being shared on the social media.

In the viral video, Aditya can be heard saying, “Mumbai pahunchne de, teri chaddi nahi utaari toh mera naam Aditya Narayan nahi (Let me reach Mumbai. If I don’t strip you, then my name is not Aditya Narayan).”

He was even heard threatening the staff as he said, “I will see you in Bombay. At some point or the other, we will reach Mumbai and then we shall see.”

Now one of the college mates of the singer, Shruti Vojhala, has claimed that Narayan has had this rude behavior in the college as well. In fact, she also said that the singer has been suspended from college for a week for misbehaving with security guards.

Her tweets read, “I remember him being suspended from college for a week because of misbehavior with security guards. Old habits die hard.#AdityaNarayan. No. Different. Just happened to see the suspension notice on the notice board.”

It was very soon that the fans of the young singer started trolling Shruti for her comment. They even asked her for an apology for the same.

To this, the girl replied by tweeting again. She wrote, “Why should I apologise to #AdityaNarayan? I’m not running any propaganda here. It was a personal account I narrated.”

Aditya Narayan is yet to react on this revelation made by his collegemate.