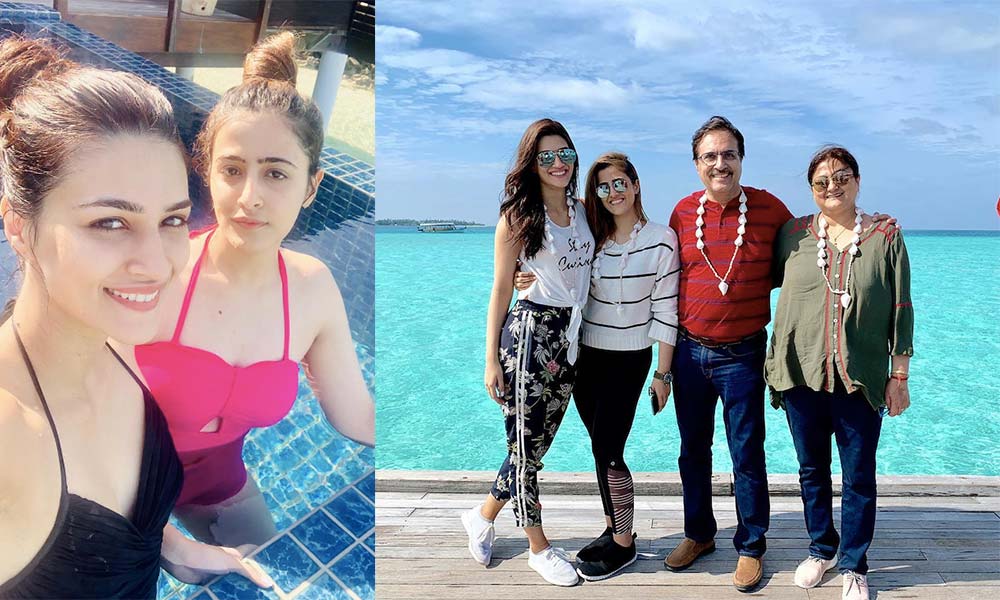 Bollywood actress Kriti Sanon who has been juggling multiple schedules over the year has finally spared some time to take a family vacation to the Maldives.

After hopping from one film to another and wrapping films back to back, Kriti Sanon has now taken off for her much deserved to break with her mother, father and sister Nupur Sanon.

The actress is seen relaxing in the pool with her sister as she enjoys the break before she would start shooting her upcoming next Panipat.

2018 has been the busiest year as wrapped shooting for Arjun Patiala earlier this year, post which she completed the shoot of Luka Chuppi. Kriti Sanon also shot for the fourth instalment of the Housefull franchise this year which would reunite her with her mentor Sajid Nadiadwala. Now, as the actress hops on to her upcoming film Panipat, she took some time off for her family.

As Kriti spends most of her time working, she often misses her family and makes it a point to spend as much quality time as possible whenever she gets a break. The actress took a much-needed break from work and set off on a fun trip.

2019 will be the full-packed year for Kriti Sanon as she has 4 release next year with the rom-com Luka Chuppi along with Kartik Aaryan, Housefull 4 with an ensemble cast including Akshay Kumar, Riteish Deshmukh amongst others, Arjun Patiala with Diljit Dosanjh wherein Kriti will be seen playing a crime reporter and the period drama Panipat with Arjun Kapoor and Sanjay Dutt.