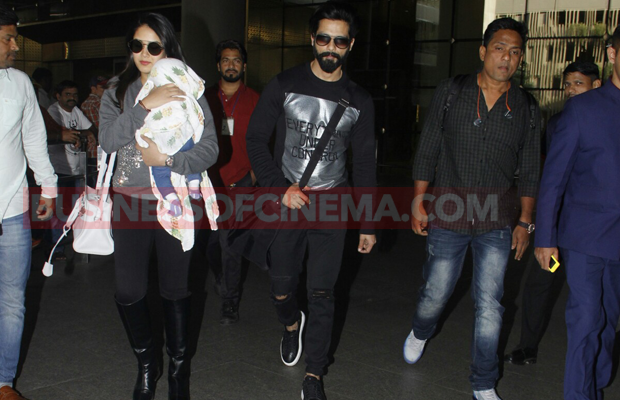 And they were definitely matching. Shahid Kapoor and Mira Rajput are inching closer and closer to the cutest couple trophy. Remember the time, when Mira Rajput was seen sans her hubby at an event, she was wearing his shirt? And she did carry it with total glam and sexiness.

Recently Shahid Kapoor and Mira, along with their daughter Misha were snapped at the airport. The couple was totally killing it with their airport looks. Shahid looked dapper in a printed black full-sleeved T-shirt. He paired it with ripped jeans and monochrome shoes. Whereas his wifey sported a chic look wearing a grey full-sleeved T-shirt, black jeans and knee length boots. She covered baby Misha in a soft white blanket and protected her from the paparazzi.

The two were surely rocking the monochrome look. Do you think it was a co-incidence that the two were wearing matching attire when it came to the colour and style? Or was it deliberate matching?

The couple made a very endearing appearance on Karan Johar’s Koffee with Karan. Which was sort of unveiling of Mira Rajput to the world. They were also seen together at the Filmfare awards this year.

Shahid Kapoor is basking in success of his movie Udta Punjab who is doing very well at the award shows. At the same time gearing up for his upcoming Vishal Bhardwaj’s love story based in war times. Rangoon, also starring Kangana Ranaut and Saif Ali Khan. The movie is set to release on February 24, 2017.

While gearing up for Rangoon, Shahid Kapoor is currently shooting for Sanjay Leela Bhansali’s period drama, Padmavati alongside Deepika Padukone and Ranveer Singh.