Aishwarya Rai Bachchan speaks up about Aaradhya’s viral video from Cannes film Festival and it is not what we thought.

This generation star kids are beautiful and they are already the darlings of media. In all probability, they are better prepared than their superstar parents. While some are planning to make big debuts, there are some who are still young enough to make it into the tinsel town right now. Though they are too young to make their debut in Bollywood, the intelligent kids are surely aware of their parents’ stardom. In fact, they very well know how to tackle with the paparazzi.

Well, Aishwarya Rai Bachchan’s daughter Aaradhya is now grown up and understands about her parents’ workings of the glamour world. Talking about how Aaradhya reacts to the paparazzi and about their stardom, Aishwarya told reporters in a FaceTime interview from Cannes. The actress said, “She has had a very normal upbringing till now. I can’t say she is blissfully unaware, she is aware of what we do. She is aware of who we are.”

Aishwarya also revealed that whenever paparazzi click pictures or when fans come over for selfies, Aaradhya at times photobombs the photos. Se also revealed that how she sometimes backouts “She sees photographers outside our home, airports, everywhere. People come for selfie requests, so sometimes she photobombs them, sometimes she says ‘mumma, not me na?’ when someone is clicking pictures, she will back out,” Aishwarya told reporters in a FaceTime interview from Cannes.

One of the recent videos of Aaradhya from Cannes sees her waving hands while Aishwarya was heading for her red carpet appearance. Many thought that the little kid was bidding adieu to her mom. However, that’s not the truth.

Speaking about what exactly Aaradhya meant by waving her hands, Aishwarya Rai Bachchan said, “When I saw the picture, I asked her, ‘Whom were you waving your hands at?’. She said, ‘No Mumma, I was telling them, no no, no photo please!”.

Isn’t Aaradhya so cute with her gestures and moreover, how she adorable tackles with paparazzi? 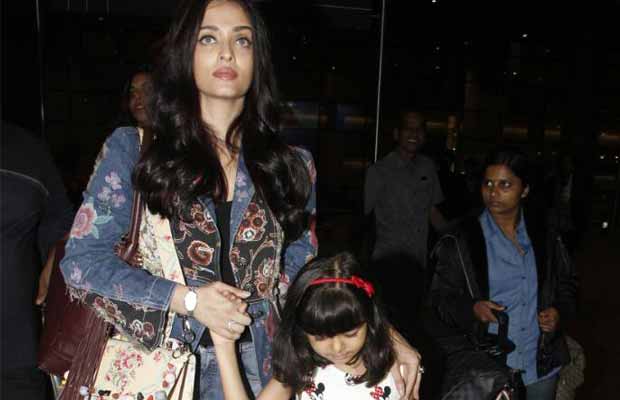