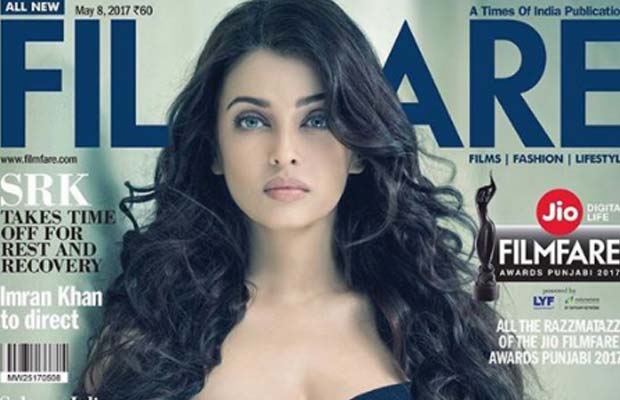 Bollywood actress Aishwarya Rai Bachchan is beauty defined in herself.

The actress, as we all know, has been the winner of Miss World pageant in the year 1994. What has been the good part about her work is that she has not left her career after her marriage or even after having a kid.

All of us were amazed at her role in her last release Ae Dil Hai Mushkil. Her performance as Saba was loved by the audience. Now the actress again has surprised us with a stunning photo shoot that she had for a magazine cover page.

Aishwarya has recently appeared on the cover page of Filmfare magazine. And we can’t help saying that the actress looks drop-dead gorgeous in that. Donning an over-sized off shoulder navy blue jacket, she is looking sizzling. The soft curls are let loose on her shoulders making her look someone who will definitely turn heads.

Who run the world? Girls! Here’s presenting our special issue that celebrates #WomanPower in B-town. #AishwaryaRaiBachchan leads the pack!

This issue of the magazine talks about women power in Bollywood. And who would be a better option than Aishwarya who has impressed us with the performances in Jazbaa, Sarbjit and Ae Dil Hai Mushkil. Jazbaa was the actress’ comeback after she had her first child, Aaradhya.

She is going to appear on screens again with her next release Baadshaho, also starring Ajay Devgn, Emraan Hashmi, Esha Gupta Ileana Dcruz and Vidyut Jamwal. The film is slated to release on September 1, this year. She is also supposedly a part of Sujoy Ghosh’s next.

With her latest photo shoot, Aishwarya has soared the already high temperature. She has proved that age is just a number and there is nothing stopping her to do more!

Watch: Aishwarya Rai Bachchan And Abhishek Bachchan To Team Up For This Film