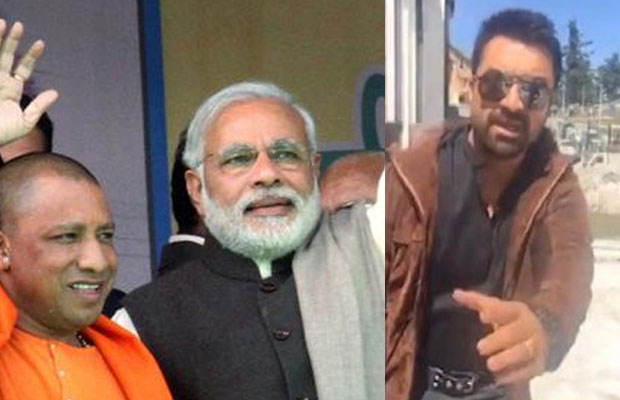 Former Bigg Boss contestant Ajaz Khan is back in the news again. Last year, he was accused of sending dirty messages/pictures to an aspiring model and was also arrested for sending obscene pictures and objectionable messages to a hairstylist. This time he is in the news for giving an open challenge to PM Narendra Modi and Uttar Pradesh Chief Minister Yogi Adityanath.

Ajaz, who rose to fame with Bigg Boss, recently posted a video asking PM Narendra Modi and Uttar Pradesh Chief Minister Yogi Adityanath to ban global brand Harley-Davidson in India. In the video, he is seen shouting at the top of his voice and making an appeal to Modi and Yogi to ban a brand in India for selling the products that are made from cowhide.

He went live on Facebook on Sunday. In the three-minute long video, Ajaz says, “I have stalled shooting in Kashmir and come live to share that all these people called ‘Gau Rakshaks’ (cow vigilantes) are causing harm and killing people. So many people have been killed and no one is saying anything.”

“I just bought a leather belt for Rs 8,000 from Harley Davidson at the airport. This is a cow leather belt. It’s being sold in the entire world. If you really consider yourself men, then I request Modi ji, Yogi ji and ‘Gau Rakshaks’ to shut down Harley Davidson. I am helping you and not making fun of you,” he added.

That’s not all; he even went on to criticize Modi and Adityanath. Ajay also said, “You want to divide citizens of the country. You want to create riots amongst Hindu and Muslims. You can’t do anything. You can just get one man beaten by 20.”

He lashed out at Modi and Adityanath saying “Go and shut Harley Davidson. You won’t get anything by beating poor. I have also observed the poor state of stray cows on the road. Please save them first. Don’t divide and provoke Hindus and Muslims in the country.”

Do you agree with Ajaz Khan? Has he made any valid points over the issue raised by him? Share your views in the comments section below.