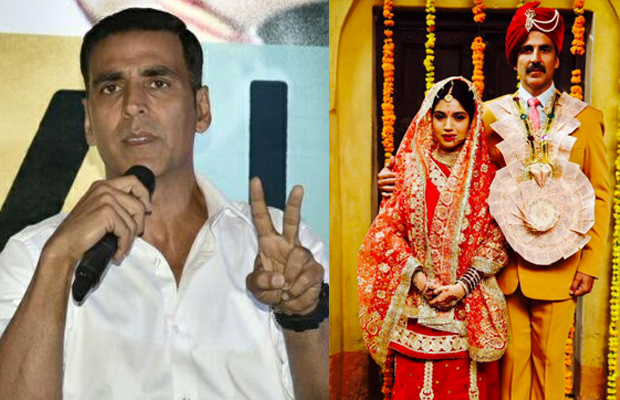 Just a couple of days ago Akshay Kumar treated us to a picture from his upcoming film Toilet Ek Prem Katha (TEPK) along with his female co-star, Bhumi Pednekar. The two were dressed in a wedding attire which means, the photo is from their wedding day in the film. Alongside the picture, he even announced the wrap of shooting and release date, June 2.

The name of the movie has caused a lot of buzz. Akshay Kumar in a press conference said that open defecation is one of the biggest hygiene issues of the country and there is no reason to shy away from the topic. It is important to not address the issue, but even to educate people of importance of having a toilet in the house.

Akshay, who has made films with relevant social themes in the background before, said, “I got a great subject (TKPH). Over 54% of the population in the country don’t have toilets at home and I thought if I make this kind of film with realism, comedy, entertainment, and good songs and present it to the people, they will understand the issue better.”

Addressing the same issue, Khiladi of Bollywood said, “When I announced the name Toilet Ek Prem Katha, many called asking me why would you name your film ‘toilet’? But for me, it’s a real story and I am talking about it. Why run away from it? It’s one of the biggest problem we have.”

Akshay feels that it’s an alarming situation: “Almost 1000 children die of diarrhea every day in India..that is equivalent to 2 jumbo jets with children crashing every day. Its alarming.”