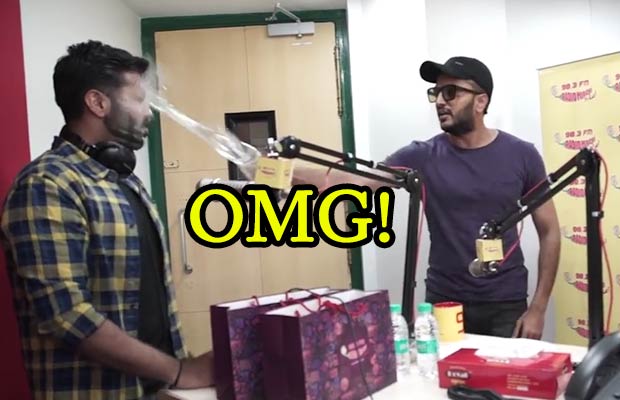 [tps_footer]Bollywood’s cool dudes Akshay Kumar and Riteish Deshmukh are in the news for different reasons. First, Akshay Kumar lost his cool in Comedy Nights Bachao when a comedian passed racist comments on Lisa Haydon and called her Kangaroo because she is from Australia and later called her Black African. And now, Riteish Deshmukh ended up throwing a glass of water on the face of RJ Arpit.

Both, Riteish and Lisa Haydon were at the studio of Radio Mirchi and they were ready to promote their upcoming movie Housefull 3 together which is set to release on June 3. But, RJ Arpit didn’t wait for Riteish Deshmukh and started with the interview only with Lisa Haydon. Later, when Riteish joined them he was upset about the attitude of RJ Arpit and he ended up throwing a glass of water on his face straight away. Watch it here,

Fortunately, it was a prank and both the actors, Riteish Deshmukh and Lisa Haydon along with RJ Arpit gave a fantastic real performance which turned out to be a big prank.[/tps_footer]