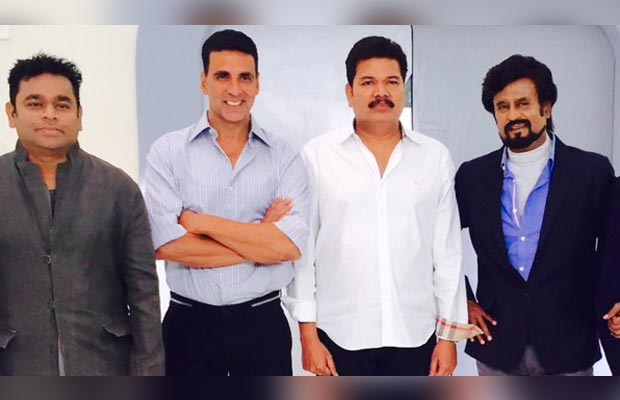 [tps_footer]Earlier we revealed that Hollywood hunk Arnold Schwarzenegger might not be a part of ‘Robot 2′, and now we know that Akshay Kumar has replaced him! The Bollywood actor himself announced the same through Twitter by sharing a photo of the entire team. Naturally Akshay is thrilled about this union, but we are all the more thrilled to see Bollywood’s action star with South action master Rajinikanth! It was pretty clear that since Arnold is exiting from the film, someone from Bollywood would be roped in for his role and it is none other than Akshay Kumar.

What is more interesting is that Akshay Kumar will be seen in the role of an antagonist, something that we haven’t seen him do in a long time. Also we couldn’t help but notice that his ‘Singh Is Bliing’ costar Amy Jackson is the lead heroine in ‘Robot 2‘. So does this mean Amy is the one who convinced the filmmakers to rope in Akshay Kumar? Well whatever the case be, it is surely a great news for all to see Akshay and Rajinikanth share screen space under Shankar’s direction.

Akshay Kumar wrote on Twitter, “Ending the year on a high note! Super excited to be a part of Robot 2 with the one & only @superstarrajini sir!” We are all the more excited to see A.R. Rahman as the musician behind the film as he has the magic to bring out the best in the movie with his amazing songs! All in all ‘Robot 2′ has become super interesting now that a Bollywood star has replaced a Hollywood actor. One of the main reasons why things couldn’t work out with Arnold Schwarzenegger is the high remuneration of Rs. 120 crores that the actor was charging.

As revealed earlier, the film shows a love triangle between Rajinikanth, Amy Jackson and the third wheel that is now Akshay Kumar. Akshay will be seen in a modern day Ravan’s avatar only difference being this Ravan is a robot. Actor Neil Nitin Mukesh has also been offered some role in the film but he was nowhere to be seen in the photo. ‘Robot 2′ begins with a bang![/tps_footer]