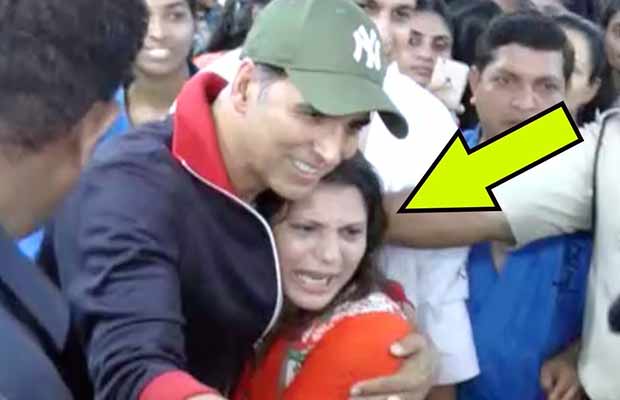 Akshay Kumar was there to attend an event where he came across a fan who started crying badly for a picture with the actor!

All of us know that our Bollywood stars have a huge fan following. Especially when it comes to the B-town biggies like Salman Khan, Aamir Khan, Shah Rukh Khan or Akshay Kumar, the fans go crazy and can do anything for getting just a glimpse of their stars.

It was yesterday only when the Khiladi of B-town Akshay Kumar was at an event. There he came across one of his female fans. The lady was crying badly as she wanted to click a picture with the superstar.

Talking about the work front of the actor, Akshay Kumar is pairing up with Bhumi Pednekar on-screen for the first time. They are going to be seen sharing screen space together in the film ‘Toilet: Ek Prem Katha’. The star cast is currently on a promotional spree for the film

‘Toilet: EK Prem Katha’ is all set to hit the theatres on August 11, this year. The film sees Bhumi playing the role of a woman who decides to leave her husband’s house immediately after her marriage. The reason being that the house does not have a toilet. The story continues with how Akshay, the husband, struggles to build a toilet in order to bring back his wife.