Aishwarya Rai Bachchan was at the Cannes Film Festival with her daughter Aaradhya Bachchan. The duo looked like princesses straight out of a fairytale. Amitabh Bachchan recently posted a picture of the two together on Twitter.

Well, we agree with Mr. Bachchan about the two of them looking like princesses. The post has received a lot of appreciation from fans. One of the fans posted a graphic drawing of the same photo that looked wonderful.

The mother and daughter duo have been the talk of the town ever since they left the city. Aaradhya gave us a cute pose before leaving for France. At the Film Festival Aaradhya was seen around her mother. Aaradhya wore a pink Princess gown with a Pink hair band.

Aishwarya Rai wore a light blue Michael Cinco with Ferrangamo shoes. The gown looked like it was designed for Cinderella to attend the ball. The gown has been a sensation in Hollywood as well as back home. Aishwarya Rai Bachchan was at Cannes for the 16th time to walk the Red Carpet for L’Oreal Pairs. Aishwarya wore two other princess gowns in red and another in a beige flower embroidered gown.

Aaradhya is photo friendly and knows that her life involves being photographed all the time. As stated by Aishwarya in an interview Aaradhya has is a normal girl who has never put nail paint and loves to play fancy dress. 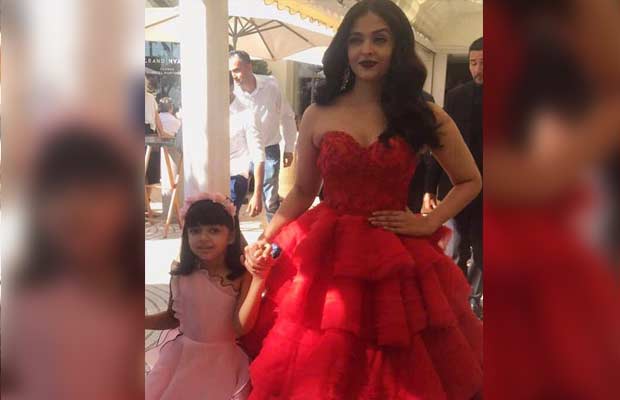 Amitabh Bachchan seems to be the happy father-in-law and grandfather when two of his daughters graced the event while representing India at the International event. Each looking better than the other we love how they looked in their Disney inspired looks.