Amitabh Bachchan replies to Ranveer Singh where the young actor has claimed that he had replied to his birthday wish!

It was yesterday only when we had brought to you all the tale of Amitabh Bachchan and his tweet for Ranveer Singh. We had told you all how Big B had reacted on the young actor not replying to his birthday SMS. And we had also reported how Ranveer Singh claimed that he had definitely replied to his text message.

Earlier, when Ranveer was replying to all his birthday wishes on Twitter, the Shahenshah of Bollywood had commented on one of the tweets saying, “hey .. but what about my intention .. sent you sms greetings for your birthday .. did not get a reply .. did you see it .. !??” 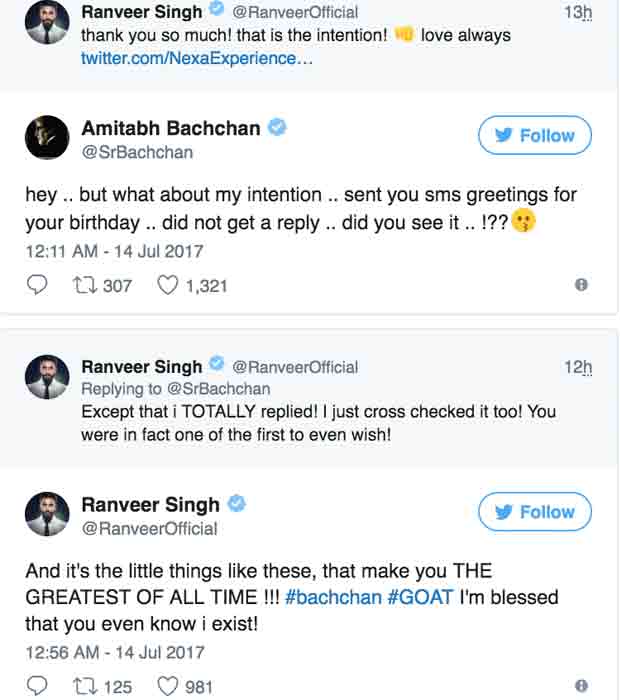 To which the ‘Bajirao Mastani’ actor had replied, “Except that i TOTALLY replied! I just cross checked it too! You were, in fact, one of the first to even wish!”

He even wrote, “nd it’s the little things like these, that make you THE GREATEST OF ALL TIME !!! #bachchan #GOAT I’m blessed that you even know I exist!”

Following the Twitter conversation, Sr Bachchan has reacted on Ranveer’s claim. He has replied saying, “Love to you .. I did not get the reply .. could be the service failed .. was out of the Country then ..”

So, now we know what had actually happened!

On their work fronts, Amitabh Bachchan is working with Aamir Khan, Katrina Kaif and Fatima Sana Shaikh in ‘Thugs Of Hindostan’. On the other hand, Ranveer Singh is going to be seen with Deepika Padukone and Shahid Kapoor in Sanjay Leela Bhansali’s ‘Padmavati’.