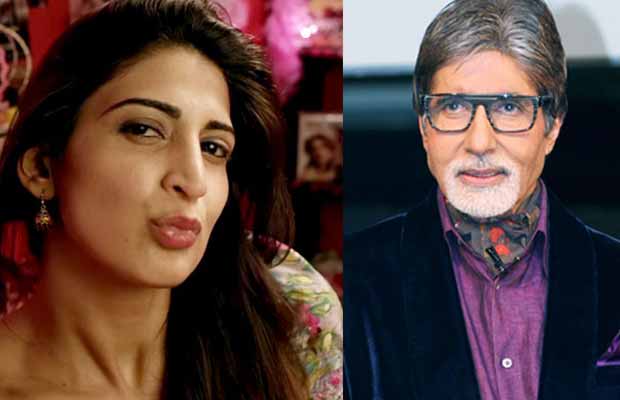 Aahana Kumra sent her co-artist Amitabh Bachchan the trailer of her film Lipstick Under My Burkha.

The gazelle-eyed actress Aahana Kumra who plays the rebellious young beautician in ‘Lipstick Under My Burkha’ and who made her television debut playing Amitabh Bachchan’s daughter in the TV series ‘Yudh’ by Anurag Kashyap, has been getting many accolades for her performances not only from the film fraternity but even audiences who have seen the film across festivals have praised her performance.

Since the film’s trailer has been out, you have to see it to believe that the actress has managed to hold her own space and steal the limelight. Even the legendary Amitabh Bachchan came forward and couldn’t stop praising the actress. He went out on Twitter and here’s what he said.. Friend and co-artist Aahana, sends me her film trailer.. looks bold and different.

When asked Aahan Kumra about the same she said,

“For a young actor like me, working with Mr. Bachchan was truly the most rewarding experience of my life. He has been very supportive of my work and always appreciates every little detail! In fact I was so overwhelmed this morning to see that he tweeted about the film and that just made my day! He’s called the film different and bold! Exactly what we stand for! I’m grateful that people across the globe have loved the film and I hope it gets the same reception in our motherland.”