Amul ads are known for their satirical take on current affairs of the country. Recently, they came up with a cleverly worded ad on the Maharashtra Navnirman Sena’s demand that all the Pakistani artists must leave the country within 48 hours or be pushed out. The ad read “Going Fawad or thinking backward”. 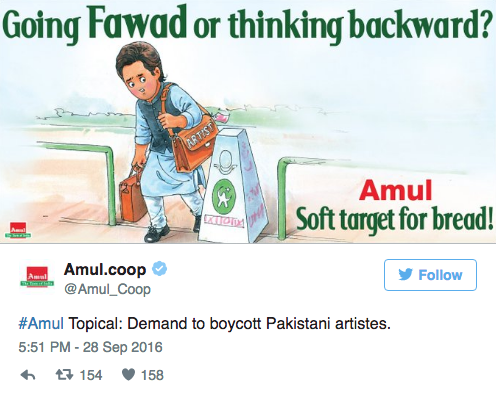 MNS, led by Raj Thackeray, gave an ultimatum to all the Pakistani artists to leave the country within 48 hours. This ultimatum was given in the wake of Uri attack in the base camp in J&K where 4 heavily armed terrorists killed 18 Indian soldiers. It has been considered one of the deadliest attacks on the armed forces of our country.

Amidst all the speculations, it has been reported that Fawad Khan, a Pakistani actor of the Kapoor and Sons fame following the threat has left the country. There are some other news stating that Fawad, the Khooburat star had left long before this happened.

Not only does MNS want the Pakistani artists to leave the country but also demanded ban on the release of their movies. Much awaited directorial venture of Karan Johar, Ae Dil Hai Mushkil is under threat as it features Fawad. They are protesting against the release of the film in Maharashtra. Another film that is also under MNS radar is Shah Rukh Khan-starrer Raees which stars Mahira Khan, again a Pakistan actress.