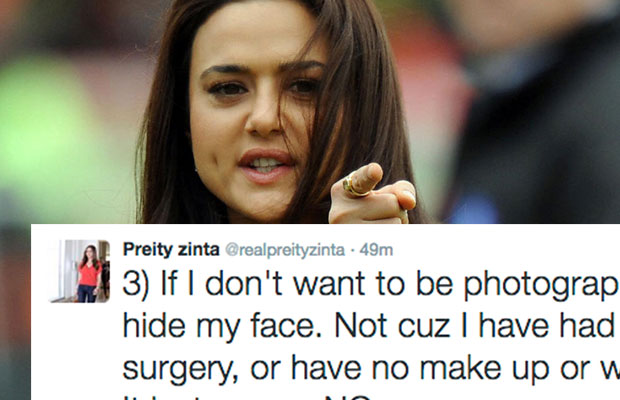 As we all know Bollywood and paparazzi go hand in hand! The photographers leave no chance to capture the stars, be it at an event, at the airport or during occasions. Sometimes the photographers also end up creating a mess in the personal life of the stars. Bollywood actress Preity Zinta who is known for her fun-loving nature has raised a question of debate asking if it is silly to ask for privacy if you are a public figure? The actress removed her frustration on twitter saying how photographers pounce on stars, leaving them scared.

Annoyed with the photographers, Preity Zinta tweeted, “Stepping out in Mumbai is not fun anymore; photographers just pounce on U ! No one politely asks 4 a photo anymore. They actually scare u”

The dimpled actress then went ahead asking her fans, “Maybe it’s time for a short n sweet #pzchat ! Topic of course Is Privacy ! Is it silly to ask for privacy if u re a public figure ?”

Preity Zinta had a long debate with her fans on the twitter over the same topic. One of the fans also suggested her to live in L.A where she can live a normal life. To which Preity Zinta replied, “It’s what grounds me… I love it there but I also miss Mumbai cuz there is no place like Mumbai”

Here’s what she wrote in the series of her tweets: