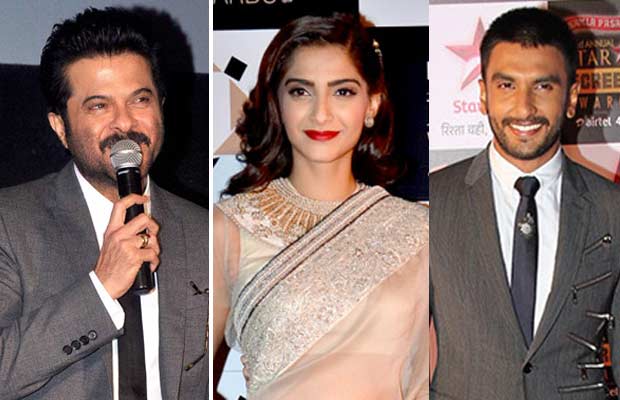 [tps_footer]Are you ready to watch thriller telly series 24 season two ??? Anil Kapoor is currently gearing up for his much awaited show in television industry which had a successful first season and lived up to it’s expectations. We recently, got to see Anil Kapoor in Colors Golden Petal Awards ceremony and he didn’t miss out on spreading his fun energy and even performed on his hit songs over the years. That was indeed Jhaakkaass !!

In a media interaction, we also tried to know who does Anil Kapoor want Sonam Kapoor to work in her next, after the fabulous response to her performance in Neerja and here is what Anil said, “I would want that Ranveer and Sonam work together. I feel they can really do something special because they know each other since many years. I think someone should cast them together,” well, very few know that Anil‘s wife Sunita is related to Ranveer‘s mom. Extended family !! And we guess, it will be a great fun to watch bindass Sonam Kapoor opposite energetic Ranveer Singh in a movie together soon. What do you say ??

Sonam Kapoor is so amazed by Ranveer Singh‘s acting skills that she suggested, if ever a biopic is made on her father Anil Kapoor then she would want Ranveer Singh to play Anil Kapoor on screen and that he has that level of energy and performance inside him to nail this character on screen. And Ranveer was not far away to share his love for Sonam Kapoor and he praised her for Neerja and here is what he said for Jhakkaass Anil Kapoor, “Anil Kapoor is the one who made me want to become an actor in the first place. I grew up in the mid-’80s and through the ’90s and, at that time, besides him, I also admired Govinda.”

Ranveer Singh surely knows who are the most passionate performers of our Bollywood and kept winning hearts for their hard work and not for scandals and controversies. Good choices Ranveer ! And we too wish for daddy dear Anil Kapoor‘s wish to come true very soon of watching Sonam Kapoor and Ranveer Singh together in one movie.[/tps_footer]