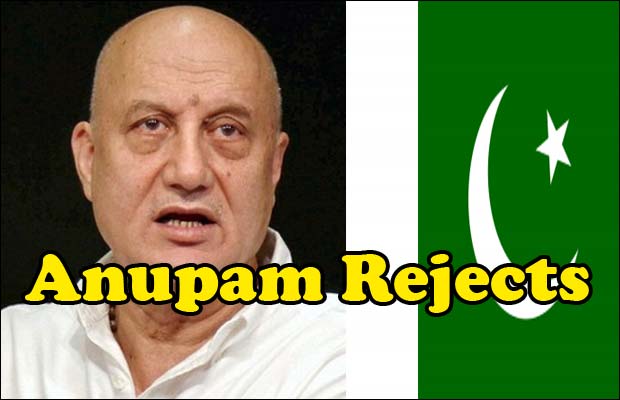 [tps_footer]Veteran star Anupam Kher is gaining all the eyeballs lately for his various tiffs on the social media platform. The senior star was much in news when he met with criticism for his change of stance for awards. The star is always entangled in war of words lately on the micro blogging site Twitter. Yet again, the senior star has gained attention for something serious. Anupam Kher was going to attend the Karachi Literature Festival, but the actor was denied visa.

The senior talented actor, took to Twitter and posted a series a tweets which highlighted the fact that he was not granted a visa and rest of the people who were attending the festival had been granted the same. The actor took to the platform and tweeted, “Dear @abasitpak1, Reality remains that Pak Interior Ministry refused to grant NOC for my visa. 17 others invited also didn’t apply for visa.”

Anupam Kher further confronted saying that only his visa was not granted to him, whereas all the others were granted a Pakistani visa for the literature festival. The following led to a war of words too. Pakistan High Commissioner Abdul Basit further tweeted on the matter saying, “@AnupamPkher sorry Sir I don’t know who told you about this so-called NOC, we are still to receive your visa application and passport.” To which Kher replied that 17 others had also not submitted their applications.

The conversation further went ahead and Kher opined that was he not granted the visa because he speaks of India’s rich traditions and is a Kashmiri pandit. Now the situation is that the Pakistani officials have offered Anupam Kher a visa, but the senior actor has denied the offer rejecting it completely.

Anupam Kher tweeted on the same saying, “Thank you Mr. @abasitpak1 for your call & offering me visa to visit Karachi. I appreciate it. Unfortunately i’ve given away those dates now.”

Well, we hope that this matter gets resolved soon.[/tps_footer]