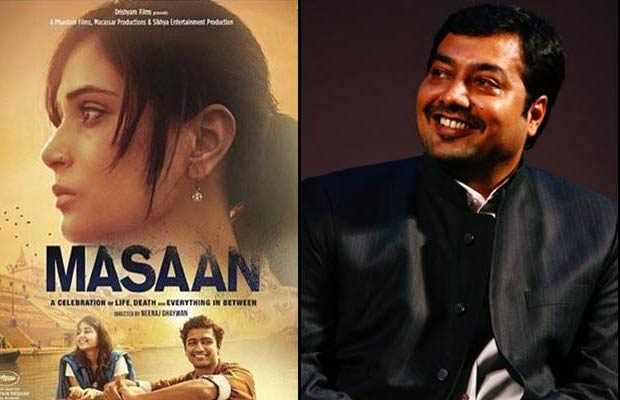 [tps_footer]Anurag Kashyap is horribly miffed over a censored version of the film Masaan uploaded by Star Network’s online streaming platform. Along with Anurag, even director Neeraj Ghaywan and writer-lyricist Varun Grover have expressed their anger on social media and are furious. Reportedly, they have urged people to watch unedited, a full version of Masaan on torrent and not on HotStar. On the other side, Shiladitya Bora, CEO of Drishyam Films, which co-produced the film and set this deal with Star, has revolted against Anurag and his supporters for asking people to watch the pirated version of this movie instead of sticking to the deal.

He also said it was decided by Central Board of Film Certification to make those changes and cuts, in order to give a UA certification to Masaan. Bora even said that Anurag and his production Phantom Films are one of the signatories to the agreement to sell the satellite and digital rights of ‘Masaan’. Now, when the rights are in the hands of HotStar why is Anurag creating an issue over the changes and cuts ? Bora is also upset about the fact that Anurag lost his cool and supported people to watch this movie illegally and this can put him in trouble and also create a rift between them for future projects.

After this response from Bora, Anurag took over and replied, “I know you don’t want to lose your job. You can fool one Manish Mundra one time or more but not the others. Own up to your mistake or sue me.” So do we have another nasty legal war starting here ? We will have to wait for that but it’s unfortunate to see rights being misused and the makers facing exploitations. We live in a world where we need to fight for our own rights. We hope things get better and this issue ends up soon with a good solution.

Here is the recent tweet from Anurag Kashyap and it looks like someone is ready to calm down and correct their mistake,

“The Masaan aspect ratio is being corrected and I have been told that one is looking into where what went wrong. Hope it all works out.” Followed with another tweet where Anurag bluntly said, “No apologies to anyone…”[/tps_footer]