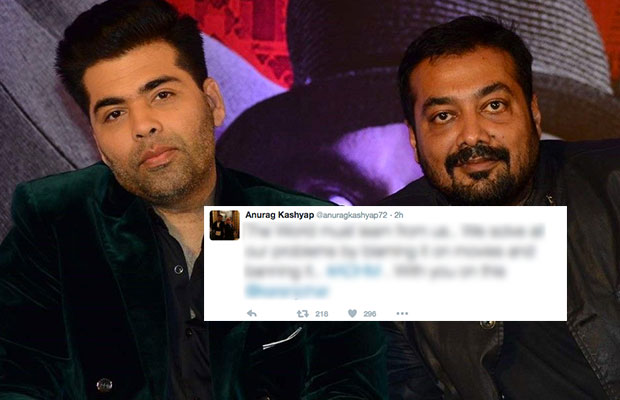 Karan Johar’s much-awaited film Ae Dil Hai Mushkil is all set to release this Diwali. As much as the hype, the film is also facing that much trouble due to the involvement of Pakistani actor Fawad Khan in it. Many political parties have shown their rage against the film post Uri attacks and have also banned the Pakistani artistes working in India. There are many who have protested as well as lended their support for the film. Anurag Kashyap is one such person who is known for his straightforward attitude.

The director-producer is the latest celebrity to join the league in support of Karan Johar. Anurag Kashyap took to twitter and said, “The World must learn from us.. We solve all our problems by blaming it on movies and banning it.. #ADHM With you on this @karanjohar”.

Anurag Kashyap has surely given a logical statement about the ban on the film. The film surely needs support after facing a lot of protest.

Kashyap was last seen in Sonakshi Sinha’s Akira where he essayed the negative role whereas Karan Johar is all set for his directorial venture Ae Dil Hai Mushkil which will be locking horns with Ajay Devgn’s Shivaay.