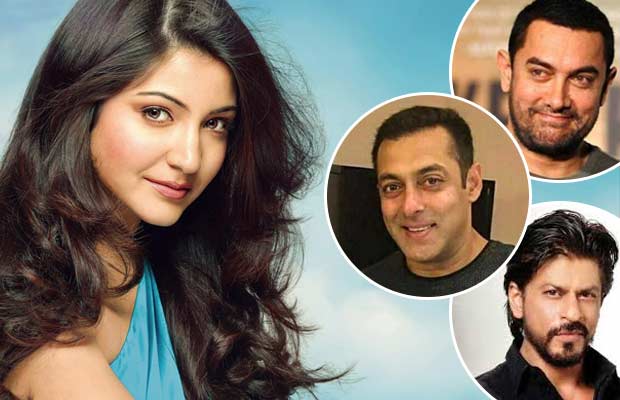 [tps_footer]Anushka Sharma has a big movie release slated for this year’s Eid and we know it’s Sultan starring Salman Khan. And, on the same day, Anushka’s first co star Shah Rukh Khan from the movie Rab Ne Bana Di Jodi, will have his movie Raees clashing with Sultan. Now, won’t it be a fair question to ask how Anushka feels about working with such big superstars and how many newcomers really get to star with a superstar like Shah Rukh Khan in their first movie and especially, under the banner of Yash Raj Films? Wasn’t she fortunate enough or just her hardwork and talent has made her that versatile actor and a successful producer that she is today.

Anushka Sharma looked extremely happy and excited to share her thoughts about working with three big khans of the entertainment industry. She said they all are unique and it’s been fun to work with them. She also said that one gets to learn so much from them and that she is lucky enough to get a chance to work with all of them. And, that’s really polite and sweet of her to mention such good traits of her seniors in the industry. Anushka has worked with Aamir Khan in PK which proved to be a big success commercially and critically as well. Although, Anushka tried working in 3 Idiots and she even auditioned for this flick, but Kareena Kapoor Khan bagged the role and Anushka Sharma missed it out, but she got a masterpiece like PK in her career which she will always be remembered for. She has the ‘never give up’ attitude in her that has taken her this far and has made her so successful.

Currently, Anushka is working in Sultan and she is also focusing in her next production Phillauri in which she will play a witch, according to media reports. Now, we hope and wish Phillauri gives Anushka another huge success like NH-10.[/tps_footer]