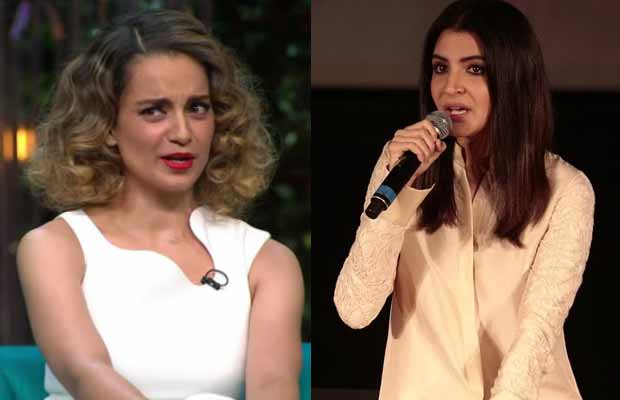 The issue of Nepotism has resurfaced after Karan Johar, Saif Ali Khan and Varun Dhawan chanted together ‘Nepotism Rocks’ at the stage of IIFA!

It all started with the actress Kangana Ranaut calling Karan Johar ‘the flag-bearer of nepotism’ on his show ‘Koffee With Karan’. Since then, the word has become a topic of debate. And the issue has grown fresh again after Karan Johar, Saif Ali Khan and Varun Dhawan chanted together ‘Nepotism Rocks’ at the stage of IIFA, this year.

So much has been written and talked about the act. All three of them have even apologised, admitting that it was their mistake.

Today was the trailer launch of Shah Rukh Khan and Anushka Sharma starrer ‘Jab Harry Met Sejal’. At the event, the director Imtiaz Ali and the lead actress was asked upon their views on nepotism.

To this Imtiaz reacted by saying, “All three of us (Imtiaz Ali himself, Anushka Sharma and Shah Rukh Khan) here are ‘outsiders’, so if there was any ‘bhai-bhatijabaaz’ (nepotism) against us then we wouldn’t be here at all! I can say this quite confidently about myself that I am here because of all the love and affection of the existing film industry, at that time. To me, this is the only place I belong. I don’t see it (nepotism), I don’t know about Anushka.”

Anushka added saying, “Like what he (Imtiaz Ali) said, we are here, and have reached where we are, within the industry. I personally was launched by the Yash Raj banner, and they’ve recognised talent before anything else. This (nepotism) was not even something I thought of when I came in the industry. But everybody’s experiences are different, and we all have to respect and value that.”

‘Jab Harry Met Sejal’ is slated to release on August 4, this year.