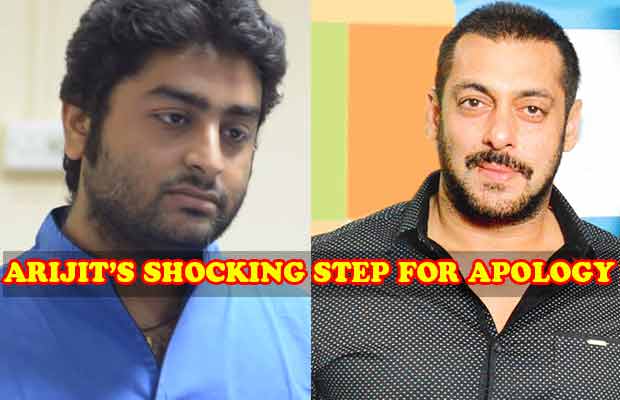 [tps_footer]As we all know recently singer Arijit Singh publicly apologized actor Salman Khan through his Facebook post. The talented singer released an open letter on his Facebook page requesting Salman to retain the version of the song, which he sang for Sultan. It seems Arijit had some second thoughts as well. He soon deleted the letter from his Facebook page but by the time damage was already done.

The incident happened in 2014 when Arijit Singh had come on the stage to receive an award while Salman was the host of the awards event. Salman Khan and Riteish Deshmukh had invited Arijit Singh to the stage to offer him an award for his song Tum Hi Ho. Salman jokingly said Arijit if was he “Aap logon ne toh sula diya...(you guys put me to sleep)”, which had left Salman furious.

During an interview with Mumbai Mirror, Arijit opened up on how he tired to reach out to Salman Khan to apologize’. He said, “I tried to reach him last night as well but in vain. So I resorted to a social media apology hoping it will reach him. I knew people would misinterpret it and when it instigated arguments, I thought I should remove it. I am not in Mumbai at the moment or I’d have gone to his apartment last night. I am going to do that once I am back. I have hopes that he will be fine with me one day.”

Taking about his song that has been dropped from Sultan, Arijit said, “When I was summoned to sing a song for Salman’s Eid release, I thought maybe he had forgiven me and recorded the song. Everyone okayed it but I heard last night that he doesn’t want my voice in the final master. That really hurt.”

Reportedly, Arijit might visit Salman Khan’s house to personally say him sorry. In fact, he will meet Salman’s father Salim Khan as well.

However, on the other hand, reports also suggest that a source close to Salman has rubbished the news and that it was producer’s call to drop the song that was sung by Arijit. Also, reports suggest that Salman is not holding any grudges and that he would not like to comment on the same.[/tps_footer]