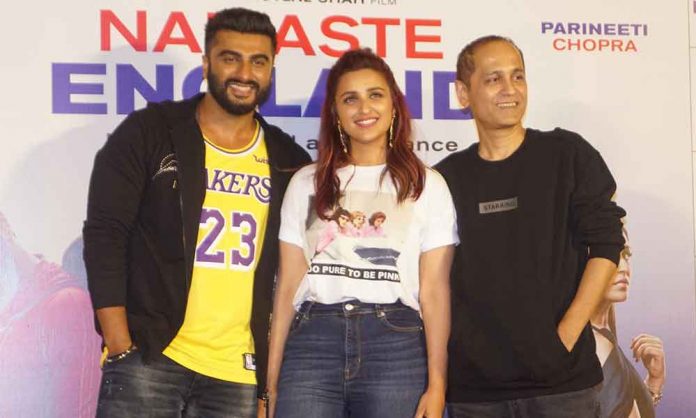 Namaste England launched its fourth song ‘Proper Patola‘ at its first-ever event in Mumbai with Arjun Kapoor and Parineeti Chopra.

The event witnessed an upsurge of energy as Arjun Kapoor and Parineeti Chopra bring the house down as they grooved to the latest party number ‘Proper Patola‘.
Apart from the leading cast, the event was also graced by director Vipul Amrutlal Shah who is also co-producing the film under the banner Blockbuster Movie Entertainers, producers Shibasis Sarkar and Jayantilal Gada of Reliance Entertainment and Pen movies respectively along with Sony Music’s Sanujeet Bhujbal.

The recreated version of Badshah’s super hit song Proper Patola, the party number is crooned by Diljit Dosanjh and Aastha Gill.
After treating the audience with the melodious ‘Tere Liye’, groovy track ‘Bhare Bazaar, and the upbeat Punjabi track ‘Dhoom Dhadaka’, the makers have now presented the party anthem of the season ‘ProperPatola‘.
Namaste England brings back the much-loved pair of Arjun Kapoor and Parineeti Chopra after their debut film Ishaqzaade.
Vipul Amrutlal Shah’s ‘Namaste England’ is a young and refreshing story that traces the journey of two individuals Jasmeet and Param. It tracks their love story across the landscapes of India and Europe. Starting from Punjab and moving to Ludhiana, Amritsar, Dhaka and all the way to Paris followed by Brussels and finally to London. It’s a fun quintessential Bollywood film starring Arjun Kapoor and ParineetiChopra.
Produced and directed by Vipul Amrutlal Shah, the film is presented by Pen Movies and Reliance Entertainment in association with Blockbuster Movie Entertainers. ‘Namaste England’ is scheduled to hit the theatres on the 19th October, 2018.