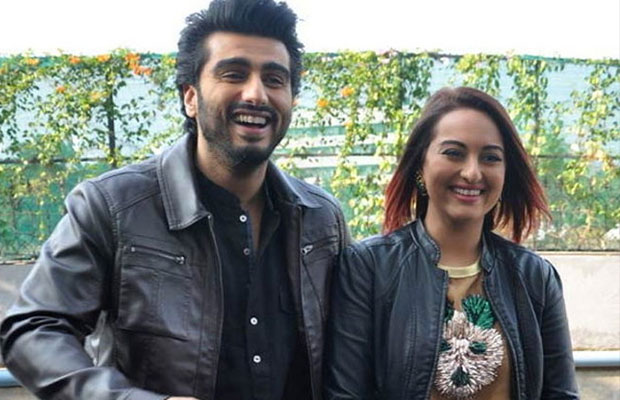 Arjun Kapoor and Sonakshi Sinha were known for their relationship back then in 2015 when they got closer for a movie named, ‘Tevar.’ They were termed as inseparable in 2015 but things changed so fast that there’s nothing of the same kind now. The two have been known for seriously ignoring each other these days.

Well, Arjun Kapoor denies from accepting this, they are not so cold to each other. In an interview with Mumbai Mirror, he said that all of that is a lie and they still greet each other whenever they meet.

He was asked specifically about Sonakshi and his tittle-tattle now, for which Arjun opened up. He said, “Some equations last. Others don’t go beyond the making of a film because after it is over, people go their separate ways. I am still really fond of her as an individual. Unfortunately, it is always made to seem like we do not acknowledge each other at parties, which is not the case. We always make it a point to greet each other. There is no pressure on either of us to maintain an equation beyond a certain amount of time. I saw the Noor trailer. I think she is going through an exciting phase in her career.”

Sonakshi Sinha has reconciled with ex Bunty Sajdeh as of now. While Arjun has not been paired up with anyone. The actor was linked with Jacqueline Fernandez and Athiya Shetty before, but all of it was pale. They went their separate ways after the break-up. Looks like Arjun is not having any hate for ex-girlfriend Sonakshi Sinha, as he mentioned above.

The two still meet and greet, but not like before that’s sure. He was also asked about his point of view towards Half Girlfriend, where he said, ‘Half girlfriend is an emotional term. Frivolous would be ‘Friends with benefits’; there is no emotional attachment there. In our film, Madhav (Arjun Kapoor) and Ria (Shraddha Kapoor) relationship doesn’t get a closure. But there is nothing frivolous there. In college, there are relationships in which you’re extremely close to the other person but sometimes it doesn’t turn into anything solid because of circumstances. That beautiful, incomplete love is half girlfriend. I’ve had one such incomplete relationship. Right now, I don’t have a half girlfriend in real life.’

So this single hunk of Bollywood is set to release his movie in the next month. While ex-girlfriend Sonakshi Sinha’s upcoming movie, ‘Noor’ will release this Friday.