Bollywood actor Arjun Kapoor is currently in the news for his next film, Anees Bazmee‘s Mubarakan. The shooting of the film kick started in Chandigarh and as per reports, actress Amrita Singh who was reuniting with Arjun Kapoor after Abhishek Verman‘s 2 States in Anees Bazmee‘s Mubarakan, stepped out of the project at the last moment. Now, Ratna Pathak has come to Bazmee‘s rescue and has stepped into Amrita Singh’s shoes for the much-talked film that also stars Anil Kapoor.

Soon reports started doing rounds that Amrita Singh who was to play Arjun‘s mother and Anil Kapoor‘s elder sister in the film has quit the film at the last moment. Well, media has their way of showcasing the news in different headlines and one of the Hindi news websites carried the story with a very insensitive title.  The headline of the story did not go well for Arjun Kapoor and he is surely hurt.

He shared the title of the story on his twitter and captioned it as, “I don’t normally react to what’s written about me but for a man who’s lost his mother I find this headline highly distasteful & insensitive.” 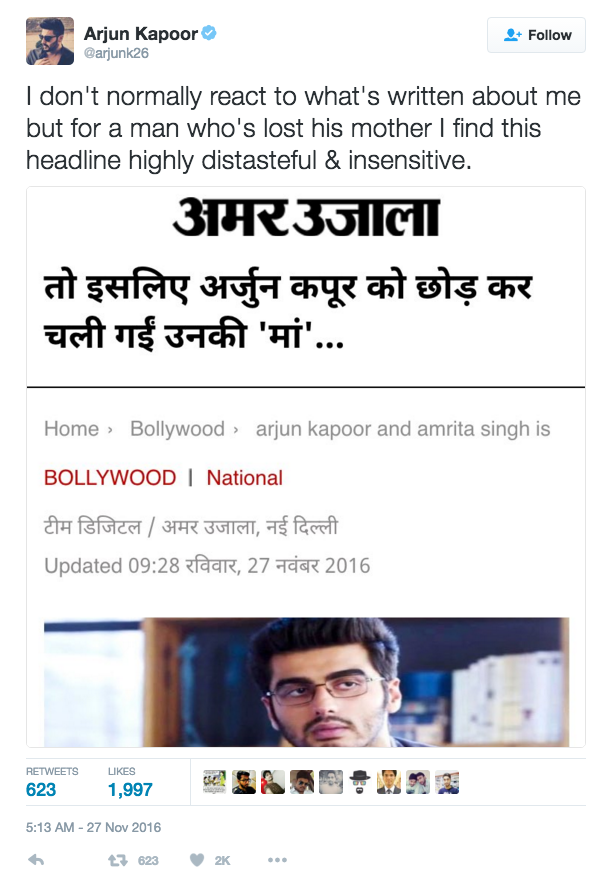 This is truly upsetting and moreover, it’s great to see how Arjun Kapoor has replied with decency.