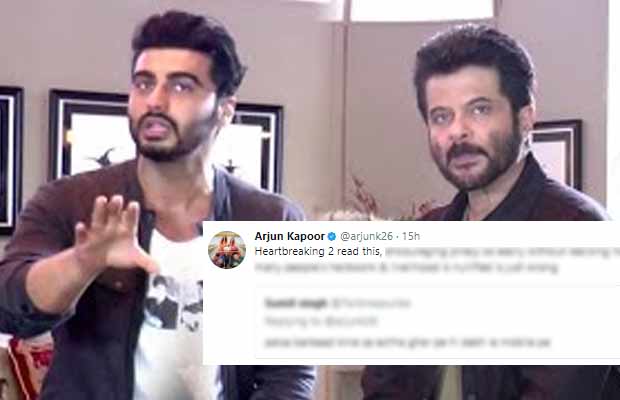 A twitter user feels that watching Arjun Kapoor’s Mubarakan in theatres is a waste of money!

The Bollywood actors Anil Kapoor and Arjun Kapoor, who are chacha-bhatija in real life, were seen sharing the same relationship on-screen in their recent release ‘Mubarakan’. The film also stars Ileana Dcruz and Athiya Shetty.

The film had hit the theatres on July 28, this year. The film has been able to do a good business at the box-office. It had got a very good response from the people of the industry. The film has not only been loved by the audience, but also appreciated by the critics. It is a clean and pure comedy with no double meaning jokes and inappropriate scenes making it a perfect family entertainer.

Amid all such good things, the lead actor Arjun came across a reply to one of his tweets, which has disappointed him. In his tweet, the actor had asked people to catch up a show of his film in their nearby theatres. One of the Twitter users thinks that watching the film in a theatre is a sheer waste of money. He even goes on saying that it is better to watch the film on the phone. In other words, he is supporting piracy.

And now the actor has reacted on such a comment of the person. He has tweeted back saying, “Heartbreaking 2 read this, encouraging piracy so easily without realising how many people’s hard work & livelihood is nullified is just wrong.”

Heartbreaking 2 read this, encouraging piracy so easily without realising how many people’s hardwork & livelihood is nullified is just wrong https://t.co/3CB5KAahAd

Piracy has been a big problem and the film industry has been facing it for a very long time. We completely agree with Arjun’s opinion on this!

In ‘Mubarakan’ Arjun Kapoor plays the role of twins Karan and Charan. Athiya Shetty and Ileana Dcruz are seen playing their girlfriends.