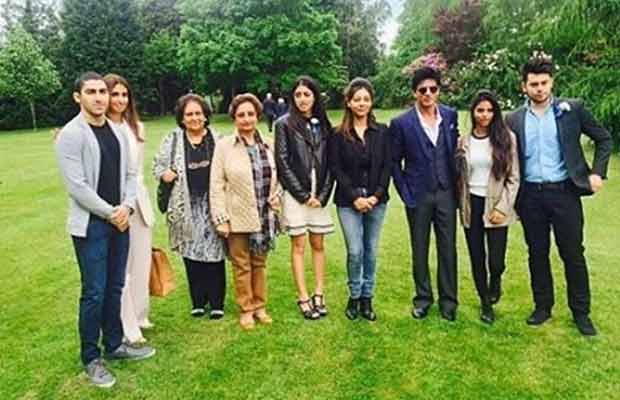 [tps_footer]The young and super hot star kids Navya Naveli Nanda and Aryan Khan are always making the news. Both, Navya and Aryan have recently completed their graduation from the London University and were even spotted partying together. As far as Amitabh Bachchan‘s granddaughter Navya Naveli Nanda is concerned, she is the gorgeous diva of the online world already and thanks to all her beautiful pics that she keeps posting to keep us alert about the fact, someday, very soon Navya will rule the silver screen too and Shah Rukh Khan‘s son Aryan Khan has already bowled us over his crazy gymnastic moves in the video which went viral online and we are still waiting to see him on silver screen soon after rocking the internet.

Recently, in a big happy family pic, we spotted Shah Rukh and his family along with Shweta Bachchan Nanda and her beautiful daughter Navya Naveli Nanda but our young handsome stud Aryan Khan was missing from this pic or else it could have been a perfect family pic of Khans and Nandas. We are still wondering what is keeping Karan Johar away from casting these two young hotties of B-Town? Well, superstar father Shah Rukh Khan should not have any issues now if Aryan Khan makes his acting debut in Bollywood as he has completed his studies and even our beautiful Navya has all the traits and looks to become a successful Bollywood actress.

But, honestly, nothing should stop Aryan Khan and Navya Naveli Nanda from making fantastic blockbuster debut in Bollywood. Don’t you think so?[/tps_footer]