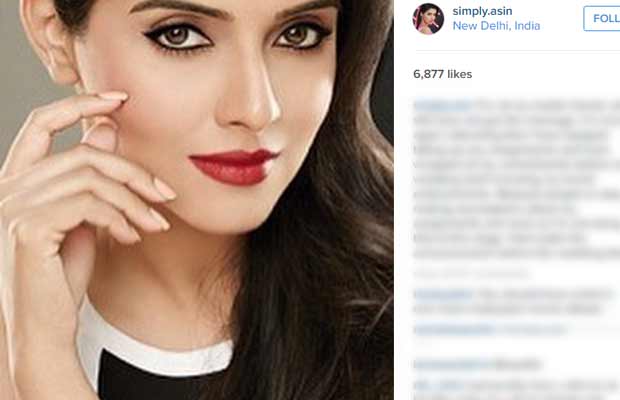 [tps_footer]So, one more beautiful actress is ready to leave her career after marriage or is Asin Thottumkal is just taking a temporary break from the world of cinema ??? Asin began her acting career in the South Film Industry and soon she made her debut in Bollywood with her blockbuster movie Ghajini starring Aamir Khan and she appeared in many more movies like London Dreams, Housefull 2, Ready, Bol Bachchan, Khiladi 786 and the last movie we spotted Asin Thottumkal was in All Is Well starring Abhishek Bachchan, Rishi Kapoor. And, now Asin has left a message for everyone on Instagram to confirm that she is not taking new projects, so speculations and questions about her upcoming projects should stop, for now. Here is her message for everyone,

“For all my media friends who still have not got the message, I’m once again reiterating that I have stopped taking up any assignments and have wrapped all my commitments before my wedding itself including my brand endorsements. Request people to stop making assumptions about my assignments and work as I’m not doing that at this stage. Had made this announcement before the wedding itself.” 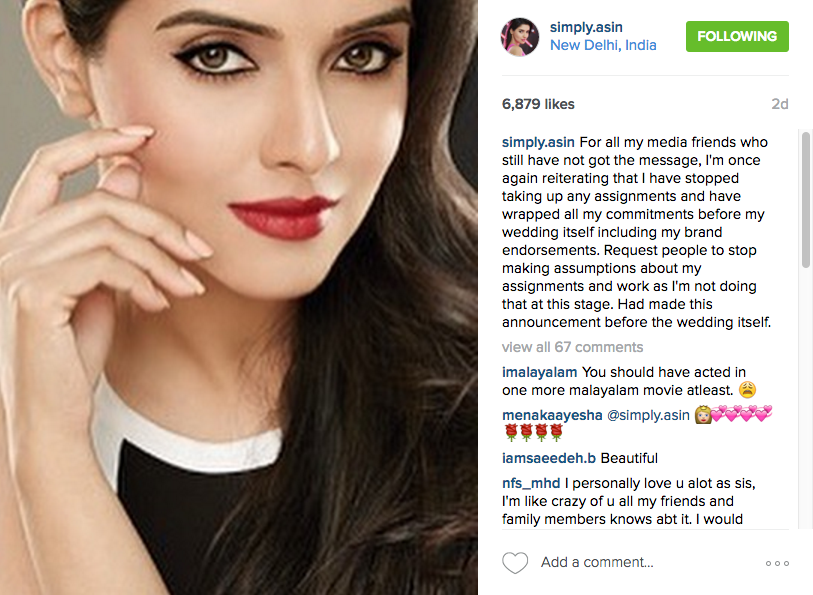 Asin Thottumkal got married to Micromax co-founder Rahul Sharma and Akshay Kumar played a successful matchmaker to bring them close. And, now Asin wants to enjoy her family life and give her time just to her family and hubby. We won’t get to see her on the silver screen, for a while. But, we are sure this cute couple will keep posting their selfies together which will keep us updated about everything happening.

An actress like Madhuri Dixit Nene, Aishwarya Rai Bachchan, Lara Dutta, Sridevi is still continuing with their successful careers in bollywood even after becoming mommies. We also have Kareena Kapoor Khan, Vidya Balan still going ahead with their acting career even after marriage and are not looking forward to just be a housewife but a working woman. We feel Asin is going a take a break from the industry for some time and we hope it won’t be a permanent says from the film industry.

We wish you Asin and Rahul a very happy and stable married life ![/tps_footer]