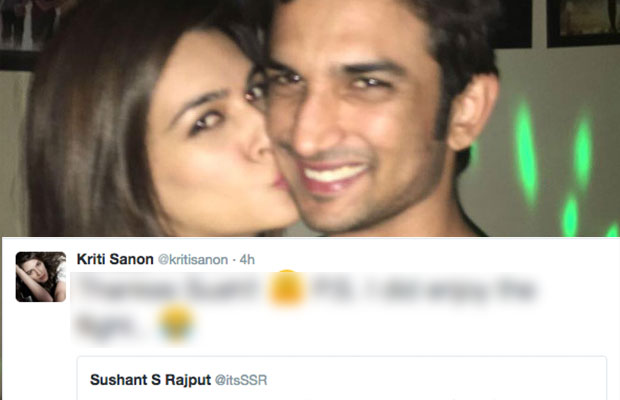 Sushant Singh Rajput and Kriti Sanon who will soon be seen romancing in the film Raabta are also rumoured to be together in real life.

Although these two have never admitted about their relationship we can guess that as they have been spotted roaming together many-a-times.

Recently, Sushant and Kriti wrapped up the shoot in Budapest and now as per Kriti’s latest insta post they are flying to Mauritius for their last schedule of Raabta. Actress Kriti Sanon who turns 26 today seems to celebrate her Birthday with rumored beau Sushant as they took off to Mauritius.

Sushant wished her co-star through his social media platform specifying Kriti to enjoy the flight in his post.

By addressing Kriti as Madam Sushant tweeted, “Happy Happy birthday madam Fly high and enjoy the flight. You are a rockstar… Much Love” the tweet ended with a kiss emoji

To which the Birthday girl replied “Thanks Sush (with a hug emoji) P.S. I did enjoy the flight”

How adorable this tweet chat is. Kriti calls SSR as Sush. No doubt love is in the air for this duo.

Wondering was Twitter not enough for Sushant to wish his co-actress that he also posted an image on Instagram captioning it “Happy Birthday Kriti Sanon. Rise and Rise and enjoy the flight..!!”