We all know that Sonu Nigam and his fatwa controversy have been spoken of a lot.

The entire thing that happened on twitter made him shave his head and go all bald, which of course is too clear to be seen.

The singer who stays in Versova, claimed that he was waken up to the sounds of azaan and he didn’t like it, for which neighbours also tweeted to Sonu Nigam saying we don’t hear it and even if it is audible, we’re a religious country.

The entire thing created such a mess that he shaved his head to stand for himself but lately he lost many of his fan following. People are literally hating him for this which is why fatwa’s were issued under his name.

But Sonu Nigam is too much into this azaan thing and has taken the controversy up in the air, he posted a video of azaan being played on Sunday and tried to prove that he was never wrong. It is audible enough to spoil his sleep, no matter what, he won’t stop it seems.

Earlier this morning, Sonu Nigam took it to twitter again, where the actual fight had begun, he tweeted saying, ““Before Great Brilliance, There Must Be Chaos. Goodmorning Good Souls..” The singer is constantly poking his point, because why not? Who wouldn’t react on such a big hair loss? See here: 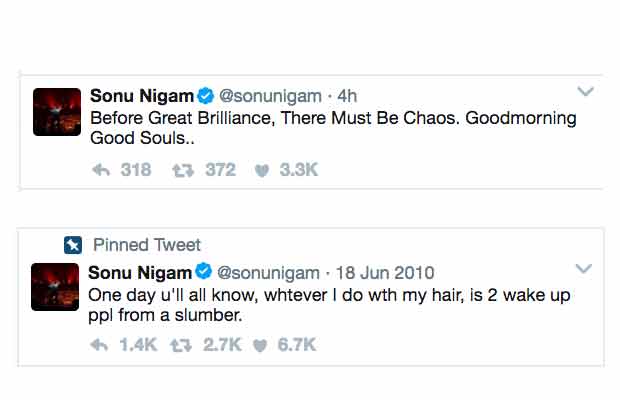 And then, he re-tweeted something from June 2010, saying, “One day u’ll all know, whtever I do wth my hair, is 2 wake up ppl from a slumber.” Fans aka Haters have replied to his tweet telling him that he went down the line to find this tweet, but they still hate him.

The controversy was all lit since Sunday when he captioned a recording of azaan saying, “Goodmorning India” and that’s it. He was trying to be witty enough and not saying much, because people who already are into this conflict would definitely recognize what this means. See here:

And what next? People are still against him and we can see that in his tweets.