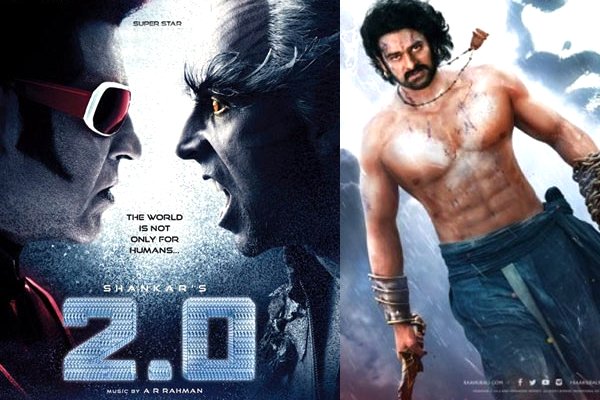 Probably the two biggest movies of the year are SS Rajamouli’s Baahubali: The Conclusion and Shankar’s 2.0. The two films are touted as humungous releases which have an unparalleled amount of interest and attention among the moviegoers across the globe. While the former has had an intriguing first installment, the latter boasts of an amazing mix of star-cast including superstar Rajinikanth and Bollywood Khiladi Akshay Kumar.

Given these circumstances, there are bound to be comparisons that are made. Rajamouli was in Chennai on Sunday to launch the Tamil audio of his Baahubali 2 at a grand ceremony. During press interaction in this event, he was asked to share his thought about people equating him with Shankar, Rajamouli said that he sort of freaks out and feels shy and happy at the same time.

He noted that when he started his career as an assistant director, the film industry was years away from adding visual effects in its filmmaking toolkit, But, directors like Shyam Prasad and Shankar were the pioneers in this respect. While “Shyam used VFX to enhance the emotions, Shankar used it to enhance the magnanimity of the film,” said Rajamouli.

“Whoever is doing VFX today have learned the art from those two directors. I will not say he is my Guru because I have never worked under him but a part of me is happy when people associate my name with him. But please do not compare Shankar sir to me,” he added.

Baahubali 2 could hold a record for being released in the highest number of screens ever in India in Telugu, Tamil, Malayalam and Hindi simultaneously worldwide on April 28. The film will be premiered in the UK a day before its India release as part of the India-UK Year of Culture events.