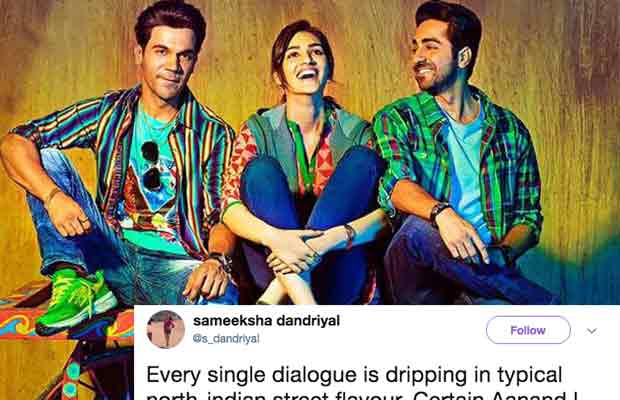 Bareilly Ki Barfi featuring Kriti Sanon alongside Ayushmann Khurrana and Rajkummar Rao has finally entered its first day at the theaters and here’s what audience have to say about the film.

Bareilly Ki Barfi featuring Kriti Sanon alongside Ayushmann Khurrana and Rajkummar Rao has finally released today at the Box Office. Bareilly Ki Barfi’ is touted as the tastiest entertainer of the year due to its interesting storyline and star cast. Well, the first public review of the film proves audience has liked the film. The film surely promises to be a fun filled tale of a love triangle between Bitti, Chirag Dubey and Pritam Vidrohi played by Kriti, Ayushmann, and Rajkummar Rao.

One of the reasons that make the film look special is because it has been backed with powerful content and has been written by none other than Dangal director Nitesh Tiwari.

If you are planning to watch the film this weekend, check out what audience has to say:

Despite clear hints to how it will go, director Ashwini Iyer Tiwari takes clever diversions in making a sweet, funny film. #BareillyKiBarfi

@kritisanon Kritiii!! You’re going places for sure, great performance! Finally got a taste of #BareillyKiBarfi and man it was special. ??

The transformation is hilarious. The pace of the film keeps it engaging. #BareillyKiBarfi

#BareillyKiBarfi has its heart at the right place. @ayushmannk is all heart,@RajkummarRao is unbelievable. @kritisanon is simply at her best

So Watched #BareillyKiBarfi !
And after a hiatus I am Tweeting this for Bollywood Film – 2nd Half Is Better than the 1st Half ??
SWEET FILM!

#BareillyKiBarfi must must watch guys.. Such a treat just before the festive season starts. @Ashwinyiyer @RajkummarRao immense respect.

It’s interval time, this #barfi is sweet so far! #BareillyKiBarfi ??

.@RajkummarRao tickles you funny bone right from the first scene. His eyes do the talking, every time! #BareillyKiBarfi

@kritisanon Seen the early morning first show and it’s your best movie and the movie is going to rock. #BareillykiBarfi