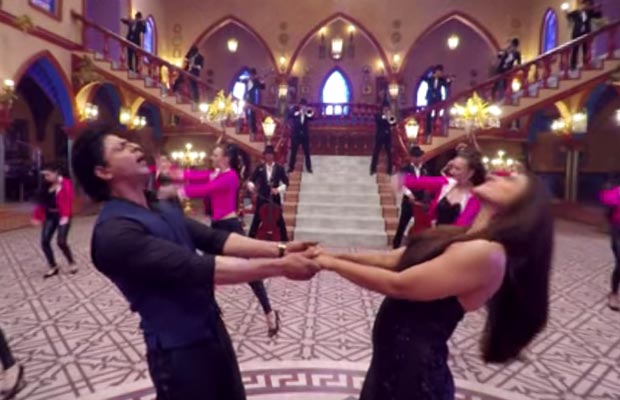 [tps_footer]Shah Rukh Khan never fails to surprise his fans with something new with each of his films. The superstar is all set to share screen space with his favorite co- star Kajol in the film ‘Dilwale’. After the song Gerua the just released romantic track Janam Janam is receiving all the laurels for its melodious tune. The track Janam Janam is neck to neck with Gerua and is equally mesmerizing.

Well, apart from the emotional stance the song is also a numero one in its technical aspect. Yes! When Rohit Shetty is the man behind the lenses one can surely expect something out of the box. Leaving alone the cars and the stunts, the team of the film ‘Dilwale’ has also shot the song Janam Janam in 360 degrees. Well, one of the first attempts of its kind, ‘Dilwale’s Janam Janam is special by this means too.

The making of the song Janam Janam in 360 degree camera angle is a treat to the eyes. The glimpse features Shah Rukh Khan and Kajol at their romantic best with top notch dancers in the backdrop. The ball room dance like theme is beautiful to gaze at. The cast and the crew of the song are seen all cheerful during the shoot and SRK and Kajol are all engrossed in their scene.

The much awaited film ‘Dilwale’ is already out with its three songs namely, Gerua, Manma Emotion and Janam Janam. The film is much in limelight because of the star duo of the tinsel town Shah Rukh Khan and Kajol. The two highly talented stars will share screen space after many years. Apart from Shah Rukh Khan and Kajol the film also stars actors Varun Dhawan and Kriti Sanon in lead roles. ‘Dilwale’ is all geared up to hit the screens on December 18th, 2015.

Until then, we can hardly wait to witness this beautiful track on the silver screen!
[/tps_footer]