Eid time is traditionally seen as a time for Salman Khan’s movie. As we all know all the three Khans are stuck to a particular season for releasing their movie. But this time, Salman Khan has chosen next year Christmas for the release of his much-talked film Tiger Zinda Hai. As we all know, Salman Khan holds several records and is the undisputed ‘King’ of the Box Office.

Salman has a double treat for his fans next year and is going to roar at the Box Office again. Salman Khan‘s next Tubelight is all set to release next year on Eid 2017. Not just one, Salman’s Tiger Zinda Hai is also releasing next year on Christmas. Salman, who chooses to do only one film a year, will have two releases next year. What more can you ask for?

This is surely a huge treat for Salman Khan fans! Moreover, Salman Khan has made everyone’s Eid. A couple of hours ago, YRF confirmed the news that Salman and Katrina Kaif are teaming up for the sequel of Ek Tha Tiger. YRF announced the big news by tweeting, “Announcing @BeingSalmanKhan and #KatrinaKaif in #TigerZindaHai Directed by @aliabbaszafar Releasing Christmas 2017.” 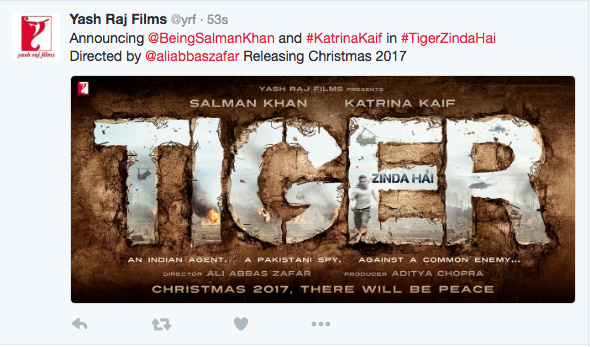 Gear up, Tiger Is Coming To Rule Your Hearts Again!