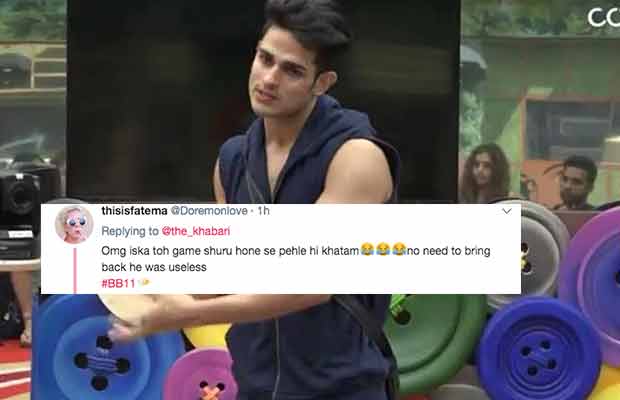 Priyank Sharma, a contestant of Bigg Boss 11 has been thrown out of the house for hitting another contestant!

Bigg Boss 11 has proven in its first week itself that the entire season is going to be very interesting. While in the very initial days, we got to see the fight between Vivek Gupta and Shilpa Shinde, the following days brought to us the increasing bitterness between Hina Khan and Shilpa.

We also saw how Vikas Gupta and Akash Dadlani got into an ugly fight that left everyone in shock. It’s only a week and the contestants are losing their temper like anything. Vikas Gupta abused and got into a heated argument with Akash after he addressed him ‘gay’. Akash questioned Vikas’ se*xuality, which created a huge ruckus in the house and things went uncontrollable.

It was the result of this fight that Priyank interfered in the matter and also slapped the rapper Akash. And that also not once, but twice. Immediately, Bigg Boss took an action and Priyank Sharma has been thrown out of the house.

Yes, we earlier revealed exclusively to you all that Priyank Sharma has been thrown out of the Bigg Boss 11 house. And the news has gone viral. In fact, people have even started reacting on the social media about the same.

Twitter has been flooded with reactions from the people. Some are finding the news amusing, some are praising it, where as there are also some others who are against it.

Check out some of the tweets made by the people:

I will not watch this show again

True. I really loved Priyaank Sharma in Roadies & Splitsivilla but this is so disappointing.

Whatsoever rule is a rule.. if priyank really slapped akash.. should be thrown out.. let's see today what will happen..