Oscars 2017 Live:  The ongoing 89th Academy Awards is witnessing who’s who of the Hollywood star gracing the red carpet. Amid everything, a huge blunder on Oscar 2017 stage has caught everyone’s eye. Warren Beatty announced La La Land as the winner in the Best Film category but it was Moonlight the winner in the same category.

After the La La Land team reached the stage to accept the award, it was announced that it happened to be a big mistake as not La La Land but Moonlight is the winner. Well, it was great to see the kind of gesture La La Land team showed while handing over the award to Moonlight.

Here’s how Twitterati have reacted to this awful blunder: 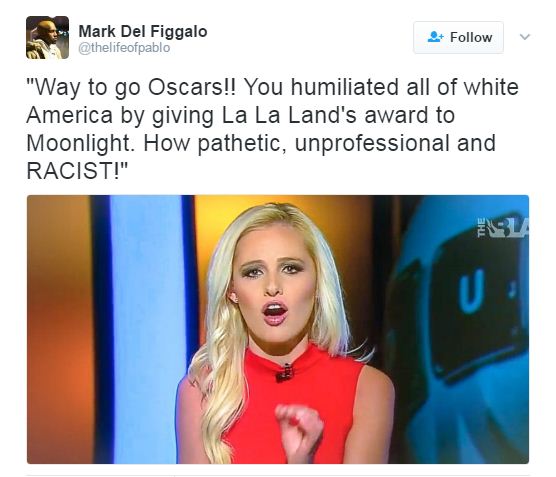 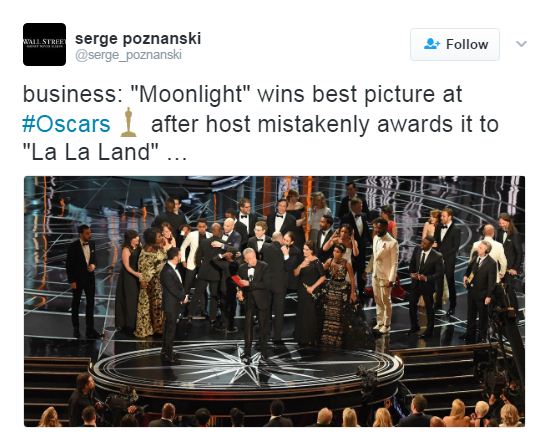 Meanwhile, the first award of the night in the Best Supporting Actor nod went to Mahershala Ali for Moonlight.

The Oscar for Best Actor goes to the totally deserving Casey Affleck, Manchester by the Sea.

The Oscar for Directing goes to Damien Chazelle for La La Land.

Oscar for Original Screenplay goes to Machester by the Sea (Kenneth Lonergan).

The Oscar for Documentary Short Subjects goes to The White Helmets.

The Oscar for Best Actress in a Supporting Role goes to Viola Davis for Fences.