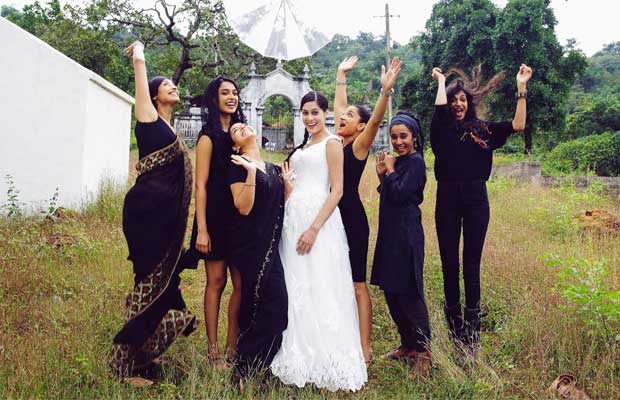 [tps_footer]Pan Nalins female buddy film Angry Indian Goddesses tugged at the heart strings of celebrities like Waheeda Rehman, Kabir Khan and Mini Mathur, Rakeysh OmPrakash Mehra, R Balki and Gauri Shinde, Javed Akhtar, Kalki who not only praised the performances of the stellar cast but also urged the audiences to watch the movie. People from the film fraternity have been going gaga over the goddesses.

Featuring Sarah-Jane Dias, Tannishtha Chatterjee, Anushka Manchanda, Sandhya Mridul, Amrit Maghera, Pavleen Gujral & Rajshri Deshpande, the movie is an emotional roller coaster ride of a bachelorette party which unfolds characters amidst fun, chaos and a series of complications that follow. The film will hit the screens on December 4th.

Here’s what the stars had to say after catching a special screening of the film:

Javed Akhtar “You don’t see these things in Hindi Cinema! The theme is very powerful and the end is very dramatic. It’s a very good film.

R Balki “The finest film I have seen in years. It’s an outstanding film. It’s possibly the best film, if not the best, one of the best films to come out…I hope everyone sees it. I hope the censor board does not touch this film. The title is stunning…The film is brilliant. I just wish we all thought like this. I am a huge fan of the film”

Rakeysh Omprakash Mehra “I think it’s a very important film, for our times, for our cinema. It’s progressive, very progressive. Very entertaining. It manages to do the most difficult thing.. Makes you laugh and cry…When I left the theatre, you could see a dry tear on my cheek and a smile on my face….and it’s been made beautifully, acted beautifully..The music is amazing. It’s definitely a story well-told. Very important story and very relevant for our times, for our contemporary times”

Waheeda Rehman “I liked the film very much. The end was very dramatic! Surely, I would recommend this film to everyone. All the actresses have done well. It doesn’t look like its some of their first film”

Gauri Shinde “I’m still very affected by the film..I’m just blown to say the least. I love each and every character in the film..Every woman in the film…I wish I could work with these women..They are so amazing. I wanted to hug them on screen. I loved the film, one of the best films of this year. Yes, it is and it deserves to be seen by everyone”

Kalki Koechlin “Well, firstly I’m very blown away by the performances of all these Angry Indian Goddesses. Each one of them..Really, really stunning, you know. You’re completely wrapped up in their stories, and as a film, it’s a modern day parable of the suffering that women are going through in this country…It’s a very powerful film”

Arshad Warsi
“The performances are great…I haven’t seen such good performances and such natural scenes. Everything’s fresh as hell!For me, it’s progressive, evolving…I have seen it in Hollywood cinema, because I haven’t seen anyone ‘act’ in foreign films. I see Indians acting in our films, and that’s a sad case. Fortunately, in this film, I don’t see anyone acting, which is wonderful.”[/tps_footer]