The talented duo, Vikramaditya Motwane and Rajkummar Rao are already creating waves with the captivating trailer of their upcoming film, ‘Trapped.’ The trailer is not only going viral and being appreciated by cinema lovers, but is also making Bollywood go into frenzy!

‘Trapped‘ is India’s first survival drama about a man being trapped endlessly for days without food, water and electricity.

National Award winning actor Rajkummar Rao is said to have put in a lot of hard work into essaying this role, going on a strict diet of being only on black coffee and carrots for twenty days, to make his character look believable on screen.

The Trapped fever has gripped the renowned craftsmen of Bollywood, with film makers taking up to Twitter to express their appreciation towards the trailer.

Here are the Film maker’s who hailed praises for Vikramaditya Motwane and Rajkummar Rao‘s Trapped trailer. 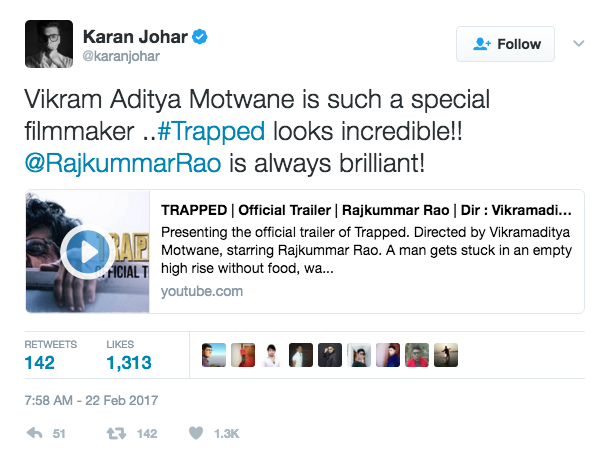 Ashwiny Iyer Tiwari wrote, “I missed in #Mami screening!Thr is no way am gng to miss it again,besty @RajkummarRao looking forward to be #trapped by ur edgy perfomance” 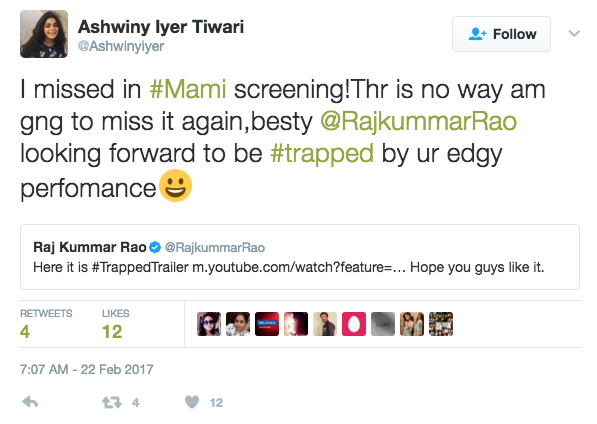 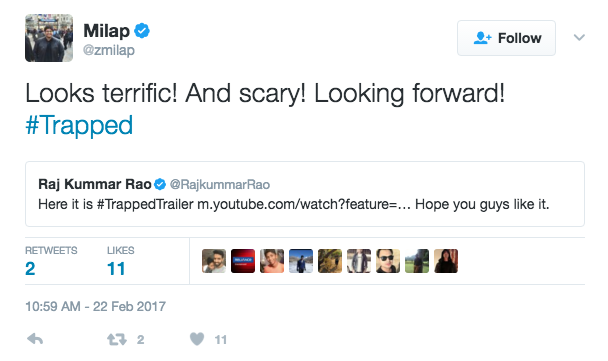 Acclaimed film maker Apurva Asrani shared, “The horror of isolation has a new face, and that is @RajkummarRao. #trappedtrailer is chilling!” 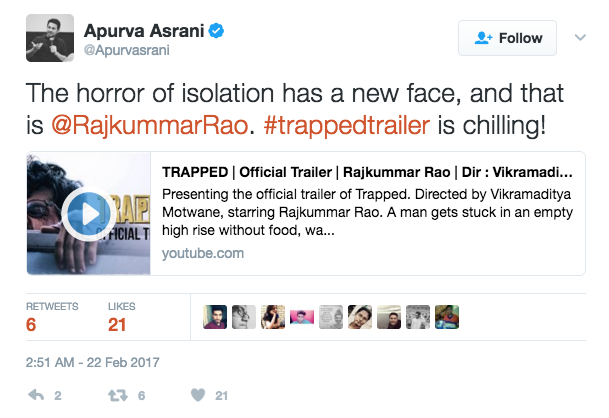 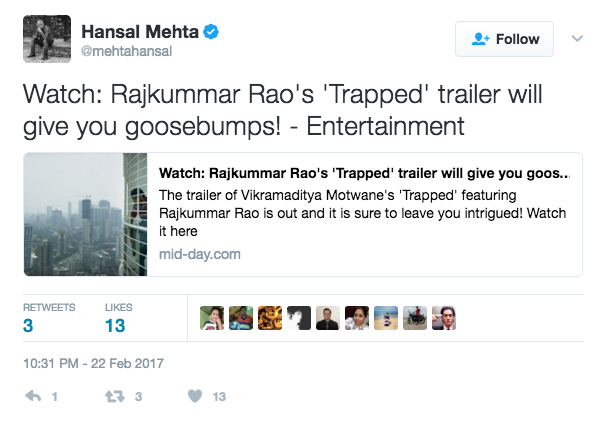 The intriguing and chilling trailer of Trapped even got BTown’s content driven actors applauding the piece of work.

Ranveer Singh was left speechless as she wrote, “BOOM!!!
FROM THE DIRECTOR OF ‘UDAAN’ & ‘LOOTERA’…Enough said https://youtu.be/RJaj39jI-qk #Trapped @RajkummarRao at his scintillating best!” 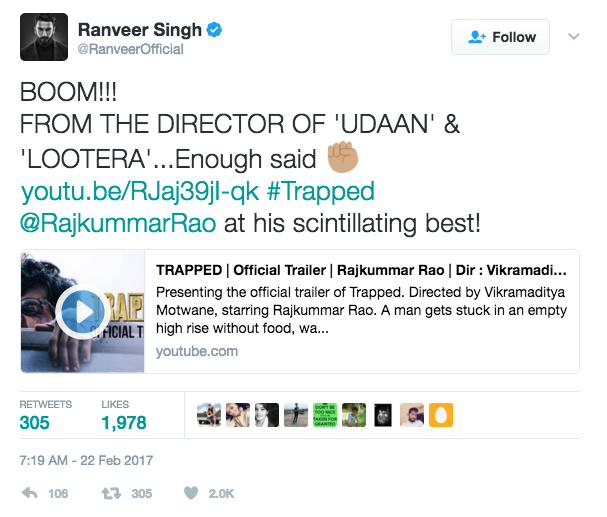 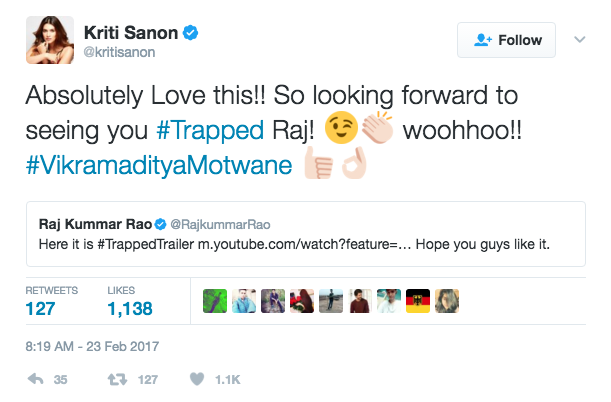 Harshvardhan Kapoor posted, “From my main man and master director #VikramadityaMotwane comes the #trappedtrailer with the awesome @RajkummarRao this is gonna be epic” 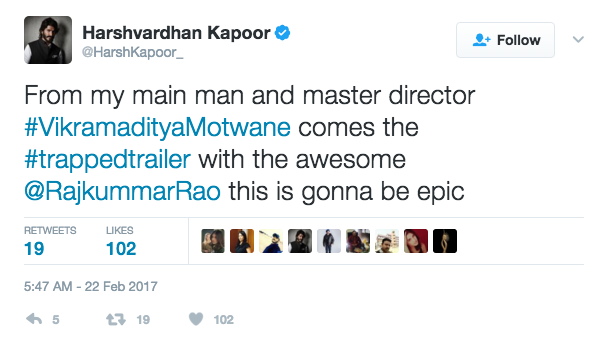 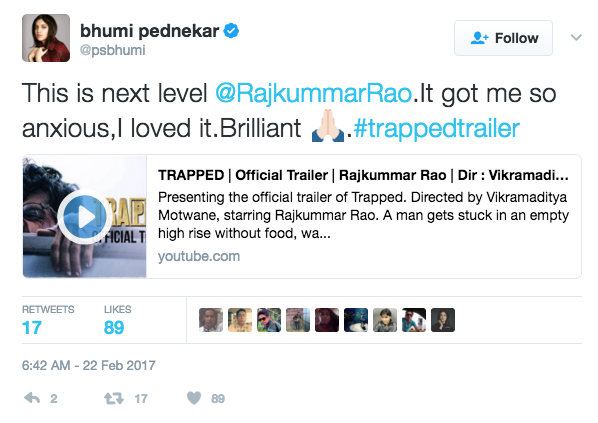 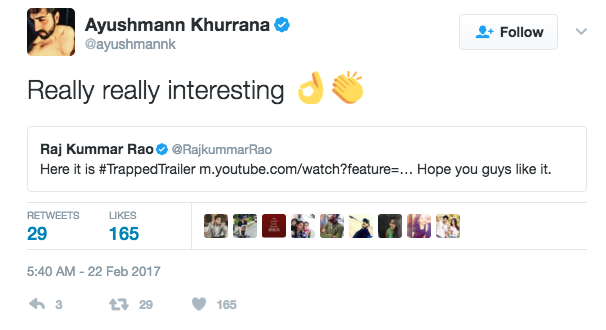 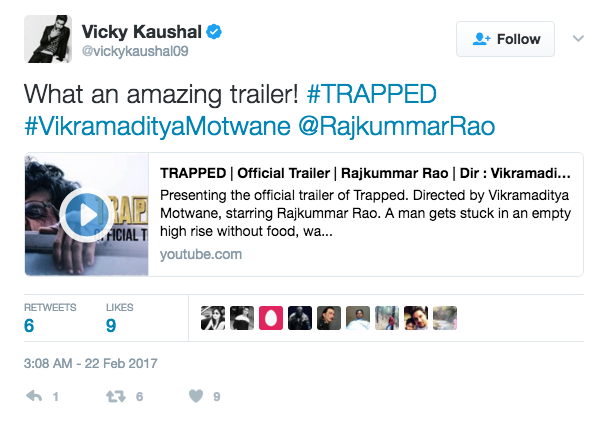 Amit Sadh said, “@RajkummarRao @YouTube this is crazy stuff …yes u have done it again bro … can’t wait to see this one !!”

Richa Chadha shared, “Uff goosebumps! Genuinely can’t wait to watch this! https://youtu.be/RJaj39jI-qk @RajkummarRao @VikramMotwane @FuhSePhantom”
Vikramaditya Motwane is back with ‘Trapped‘ after being widely appreciated for his films ‘Udaan‘ and ‘Lootera.’ The audience as well as the biggies of Bollywood are looking forward to a nail-biting experience watching the ace actor-director duo enthrall them. 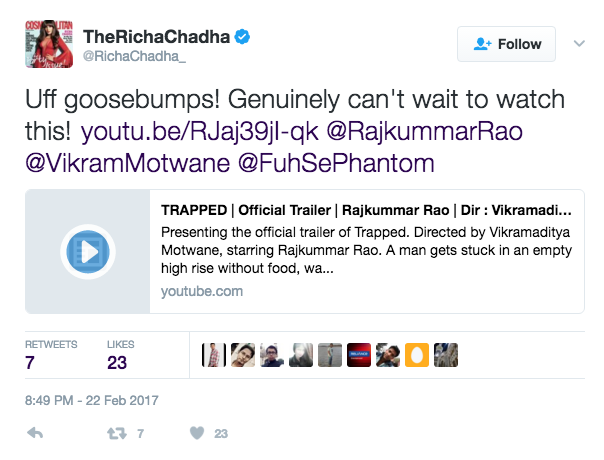