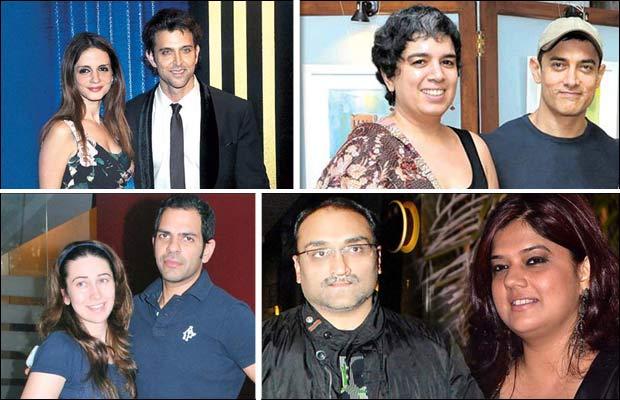 It is said that marriages are made in heaven but it seems those were not meant for some of the Bollywood couples. Many Bollywood stars have failed to reconcile their marriages despite of many attempts. So here we bring to you few Bollywood love marriages that shockingly ended in divorce; and some that are headed in that very direction unlike other normal divorces.

Hrithik Roshan and Sussanne Khan: Bollywood’s most memorable couple Hrithik Roshan and Sussanne Khan ended their 17-year long relationship in December 2013. Blessed with two sons Hridaan and Hrehaan, Hrithik and Sussanne had a perfect love life. But unfortunately, like many other Bollywood stories even this love story came to an end resulting to divorce. Sussanne reportedly demanded a whopping ‘400 crore’ from Hrithik as alimony and moreover the doting father agreed with the settlement.

Anurag Kashyap and Kalki Koechlin: As we all know recently B-town couple, Kalki Koechlin and Anurag Kashyap who got married in 2011 and separated in 2013 are now officially divorced. But it seems Anurag’s ‘Bombay Velvet’ failure made Kalki feel pity on him. The duo settled outside the court!

Saif Ali Khan and Amrita Singh: Saif Ali Khan who married to Amrita Singh in 1991 had put an end to their 12-year-old marriage in 2004. In return Amrita along with the custody of her children asked a hefty amount of 5 crore and a lavish bungalow.

Aamir Khan and Reena Dutta: The ‘PK’ actor Aamir Khan, who married to Reena Dutta before Kiran Rao, had put his marriage to end in 2002 with a disclosed alimony.

Karisma Kapoor and Sunjay Kapur: Actress Karisma Kapoor had a failed marriage to Delhi based businessman Sunjay Kapur. The couple that got married in 2003 filed for divorce in 2014. Karisma has always been lipped about the divorce alimony. But the rumours were that she demanded 7 crore as a alimony.

Rhea Pillai and Sanjay Dutt: Sanjay Dutt who got married to Rhea Pillai in 1998, apparently paid Rs 8 crores to Rhea as alimony. He also gave his former wife a car as well.

Prabhudeva and Ramlath:  Not many are known but superstar Prabhudeva is also divorced. He divorced his wife Ramlath in 2011 and gave his wife property worth of Rs. 20-25 crores, which included villas, but also got Rs. 10 lakh as one time alimony and two expensive cars