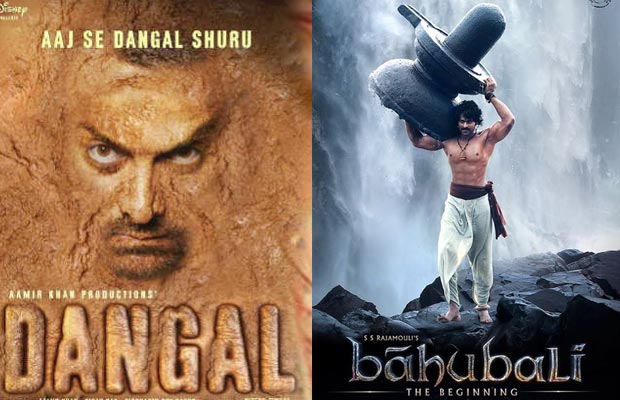 [tps_footer]Fans are surely waiting to catch the much-awaited big budget films next year; Aamir Khan’s Dangal and S.S. Rajamouli’s Baahubali 2. Both the much-anticipated films, which are scheduled to release next year, might end up releasing on the same date too.

According to the reports, the second installment of Baahubali: The Beginning could be scheduled to release next year in Christmas when even Aamir Khan’s Dangal is scheduled for its release. If this happens to be, Aamir Khan might surely be upset, as we all know releasing of two big films on the same date, is a big gamble for the makers of the film.

On the other hand, Aamir Khan who is currently going through ‘intolerance debacle’ is shooting for Dangal. Mr. Perfectionist Aamir Khan is leaving no stone unturned for the shooting of his wrestling themed film Dangal, which is based on a biopic.

Talking about both the films, both Dangal and Baahubali are coming in a grandeur way and both the films have their own USP. Dangal is creating much of hype for the efforts and the major physical transformation that Aamir Khan is going through for the film. While Baahubali has already shown its magic at the Box office by breaking all the records and also for the usage of the VFX at the big scale.

Well, if this happens to be, we are sure these two films would roar louder next year as much as the two upcoming films Dilwale and Bajirao Mastani will at the Box Office on December 18, 2015.[/tps_footer]