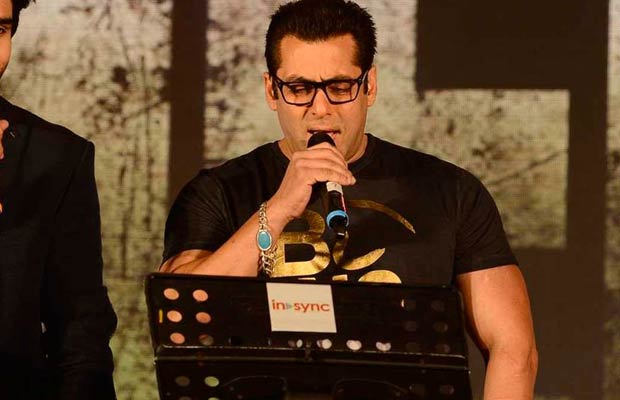 [tps_footer]Salman Khan is an all-rounder when it comes to creativity; the actor has taken a sudden liking towards singing. All Salman fans have something to rejoice for yet again. The Dabangg Khan who likes to croon for his films will again flaunt his singing talent in the film ‘Sultan’. The actor who is a favorite of the masses will be crooning the song Jag Ghumiya in ‘Sultan’.

Salman starrer film ‘Sultan’ is much awaited by the masses. The film stars actress Anushka Sharma opposite the Bajrangi Bhaijaan actor. Both Anushka and Salman have trained hard for their characters in the film. The talented super actors will be seen as wrestlers in the movie. Reports suggest that the handsome hunk Salman Khan will himself sing the song Jag Ghumiya which is a dance number.

The song is speculated to be a celebratory track with dance moves and beats. The track will not only see our Prem Ratan Dhan Payo actor but will also feature Anushka. The song is composed by Vishal- Shekhar.

The official teaser of the film ‘Sultan’ has already made a huge mark. Though the teaser was also trolled by many, overall the glimpse has been loved. ‘Sultan’ directed by Ali Abbas Zafar will see Salman Khan in the role of a Haryanvi wrestler. Likewise, Anushka Sharma will also flaunt her tough side by playing the role of a wrestler.

The short glimpse of the film only featured Salman but reports suggest that the makers are soon going to release another teaser which will only see Anushka. We can hardly wait for Salman’s song to release!

‘Sultan’ is all set to hit the screens on Eid this year.[/tps_footer]