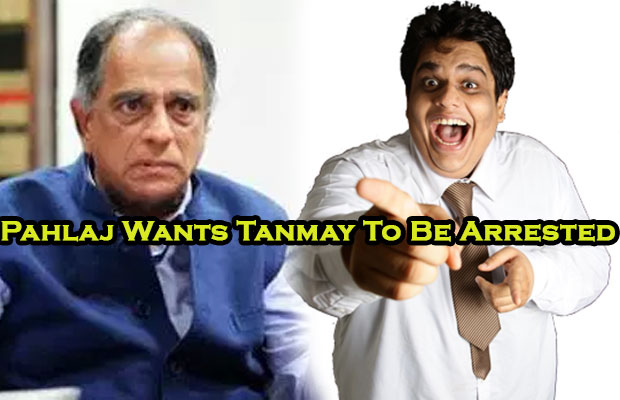 [tps_footer]Tanmay Bhat is feeling the heat for his Snapchat spoof where he ridiculed Sachin Tendulkar and Lata Mangeshkar. Whether the video was cool or not, is entirely up to one’s discretion but what we didn’t like were his insulting of Lata Mangeshkar’s age and the ‘death’ joke! But arresting him for it is pretty insane, we think. The matter is just going aboard!

On the other hand, MNS (Maharashtra Navnirman Sena) thinks otherwise and they are trying to put him behind bars. And supporting them in their ‘struggle’ is the Censor Board chief Pahlaj Nihalani. This will be a new game, altogether.

During an interview with NDTV, he clearly voiced his opinion :“Tanmay Bhat is a repeat offender, he deserves no freedom. He has insulted the mother of music.”

Later, when speaking to daily, Dainik Bhaskar, he said, “Banning this character in Maharashtra is not enough. Lataji and Sachin Tendulkar don’t belong to Maharashtra only, they are a part of every Indian’s life. This fellow has insulted every Indian. He should be arrested immediately without any further delay and dealt with severely. Doing this two institutions who have devoted their lives to doing our country proud…shame!”

Well, we think this matter is definitely being blown out of proportion. What say, guys? Going by the Censor’s Board condition right now (after banning Udta Punjab) people might not take it in the right spirit![/tps_footer]