Tannishtha Chatterjee had a bad experience when she visited Comedy Nights Bachao. The show which is meant to be a roast for all actors went overboard with their insensitive comments. The show which is not visited by many actors because of its format has again been criticized for its irresponsible humor. Tannishtha was subjected to many rude comments for her dark skin on the show.

The actress who is known for her speaking her heart out was initially looking forward to be a part of the show. However, things turned ugly when the hosts could only point out jokes at her skin color. This did not go well with the starlet and she decided to leave the show.

Tannishtha Chatterjee then expressed her bad experience and the stigma attached to skin color in a post on Facebook. The actress described about the same and Colors TV then apologized to the actress. 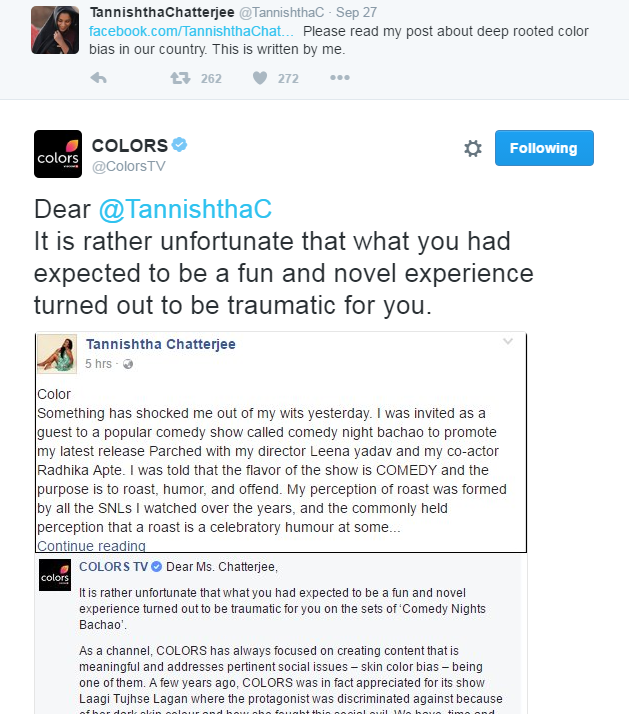 Well, even though the channel responded with a meaningful reply and an apology host Krushna Abhishek is adamant that the show has not expressed anything hurtful. Krushna replied on the matter saying, “I was the first person she met on the sets. She was very respectful and sweet. She told me that she had never watched either my show or AIB’s Roast. When the show started, I could see that she was getting uncomfortable and not enjoying herself at all. I told this to the director. She left after 2-3 segments with the rest of the cast of the movie.”

Krushna further stated, “She was just not prepared for it. Everyone met me during the show. Leena even knew the format of the show and she was enjoying herself. Tannishtha has never seen Hindi television so what would she expect? She was expecting caesar salad or a burger… an American comedy show but we served her the desi vada pav, full of masala. That’s how Krushna and Bharti roast people.”

Krushna Abhishek finally concluded the matter and said, “We say all sorts of things to Bharti too. We call her moti, bhains and what not. Ek dhang hota hai bolne ka. Tannishtha was just not ready for it. I don’t have any bad blood with her. I respect women and I also apologise to her if she felt hurt. It is never our intention to cause hurt to anyone.”