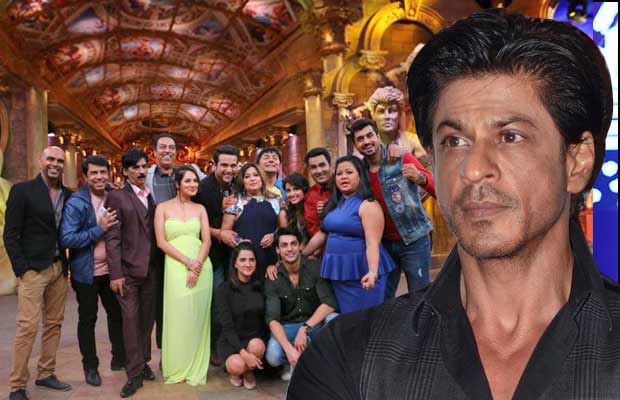 [tps_footer]Bollywood actors Shah Rukh Khan and Kajol were continuously promoting their film ‘Dilwale’ with their entire team. From ‘Bigg Boss 9′ show to ‘Comedy Nights with Kapil’ show, the stars promoted their film at every popular platform.

SRK also visited on Comedy Nights Bachao show for the promotions of their recently released film Dilwale. ‘Comedy Nights Bachao’ show is popularly known to royally roast the star guests. The concept of the show is based on roasting the guest actors who choose to sit on the hot seat where Krushna Abhishek, Bharti Singh and others will be seen grilling them with some sarcastic insults.

The show, which likes to roast the stars while they come on the show for the promotions, had crossed all the lines during SRK’s presence.

According to the reports, Bharti Singh and her co-host Abhishek Krushna went too far with their insulting jokes on Shah Rukh Khan. SRK, who can laugh on himself, couldn’t bare the offensive jokes made on him on the show this time. Reportedly, SRK asked the producers of the show to remove the more offensive jokes made on him and with no choice the makers of the show had to remove it.

Well, a lot of stars have come on the show for the promotions of their film, but they have equally accepted the format of the show with no objection and with no choice too. But when SRK asks to remove it, we guess it has to be.

The show will go on air this Saturday and we wait to catch the hilarious part of the show. Also SRK and Varun Dhawan had a fun time with Bharti and Krushna.[/tps_footer]