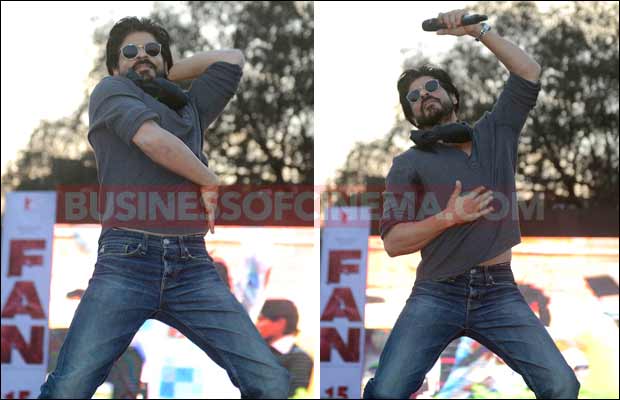 Hahaha… You read it right. It has actually happened that a fan of Shah Rukh Khan, tried to trespass his house and demanded to bathe in the same pool that Shah Rukh bathes in. I wonder what this fan must have done in the theatre if he saw Shah Rukh Khan‘s “Dard e disco” bathing scene and “Lux” soap’s tub scene.

Shah Rukh revealed about his crazy fan while promoting his YRF movie “Fan” and the obvious question asked to him, was encountering any of his crazy fans and what was the craziest fan incident that happened with him. He spoke about this guy who wanted to bathe in his pool and he said, “He took off his clothes and jumped into my swimming pool. When he was going back, my guards enquired him about what he was doing there. He told the guards that he just wanted to bathe where Shah Rukh Khan bathed,”

Crazy fans, full of carzy demands and wants. Usually, making noise and waiting endlessly outside the houses if their favorite Stars is an obvious things for fans where they even forget that they are not just loving but stalking their Star and depriving them of privacy but here we have a super duper crazy fan of SRK, who wishes to save water by bathing in the same pool, in the same water that SRK bathes in. So heart and body touching !!

Crazy female fans of Shah Rukh Khan are not far behind. They like to see a “Rahul” or “Raj” in their own partners and their poor partners have no other option but to try be like SRK, now that’s tough !!! Girls never hesitates in flirting with King Khan and dancing on his numbers even when they are accompanied with their lovers, who will just burn within seeing their girls falling all over SRK. These guys have no other option but to clap, smile and ask for tips from King Khan, so that next time same can happen for them too. A lot of his female fans fall flat on his signature move of “spreading his arms”, it’s the way SRK welcomes his fans. Yes, with open arms. They turn on with his voice, especially when he says his lines from “Jab Tak Hain Jaan”. People, hear him saying it, if you haven’t till now and I bet, you will be his fan too.

His male fans consider him to be the ultimate “love guru”, “King of Romance” although a lot of time SRK himself has said that he is not that romantic in real life. Will have to confirm it with Gauri Khan ! But this is how SRK is in real life. So, what happens to him on screen the minute he has to romance his lead actresses, where does these adorable “Raj” and “Rahul” come from inside him and sizzle the screen and the hearts of sooooo many and where does the passion and romance in him gushes out from ??

On SRK’s birthday, it’s difficult to travel from the vicinity where he has his bungalow “Mannat”. His fans, males, females, kids always wait to see a glimpse of him and wish him on his birthday. Shah Rukh Khan, staying loyal to his fans, every birthday morning he first addresses his fans from his home’s terrace and does signature move too, he dedicates a few songs to his fans and he also grooves on it. After addressing his fans, he addresses media and then  spends the rest of his day in his “King Style”. But he surely values his every fan and has a lot of love to give. No wonder, why SRK has been ruling hearts of so many people from past two and a half decades !!