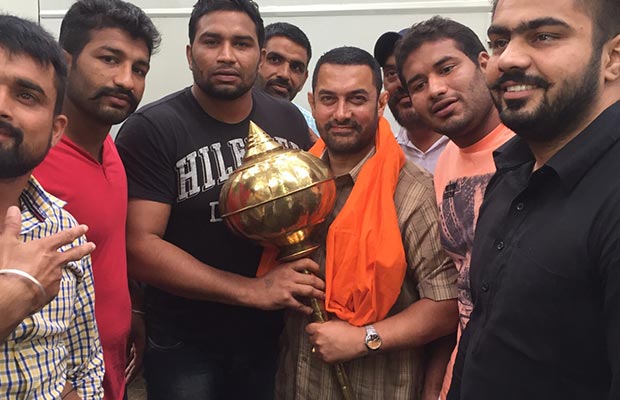 Aamir Khan has been busy shooting in Punjab for his upcoming film ‘Dangal‘. To sulk into the local flavor, the PK star has also been working out in the local akhadas.

Recently, local wrestlers presented a special golden Gada to Aamir Khan while he was shooting in Ludhiana. Spokesperson of the film confirms and adds, , “The team has brought in real local pehelwans and wrestlers for the film, and after the day’s shoot, they got together and presented a Gada to Aamir.”

Gada is the main weapon of Lord Hanuman, who is worshiped by all the akhada wrestlers and pehelwans in India for his strength. The team of local pehelwans thought Gada would be a perfect memorabilia to present the actor with, as he also plays a wrestler in the film.

Aamir Khan’s ‘Dangal’ is based on the life of former wrestler and coach Mahavir Singh Phogat who trained his three daughters and one niece for the Commonwealth Games. The shoot of Aamir Khan starrer ‘Dangal’ will soon go on rolls and the film is scheduled to release only next year. The ‘PK’ star will yet again charm the audience with his versatile performance in his upcoming movie. ‘Dangal‘ produced by Disney and Aamir Khan Productions and directed by Nitesh Tiwari, is slated to release on Christmas 2016.