The movie released in India on 14th January and is set to release in the U.S.A on 20th January.

Deepika‘s character, which is being tagged as the female match of Xander as “Serena Unger” is being much loved and appreciated for how strong and independent it is. The unanimous feedback is how Deepika has held her own in her Hollywood debut.

Deepika was on a two-day promotional spree in Mumbai along with her co-star Vin Diesel and also had a grand premiere for this Hollywood debut in her homeland.

Audiences’ reactions and responses to her performance has completely overwhelmed her. She took to social media and tweeted, “Beyond thrilled & overwhelmed with the amazing response & reactions to #SerenaUnger! #xXx:ReturnofXanderCage. Thank You all for the LOVE.” 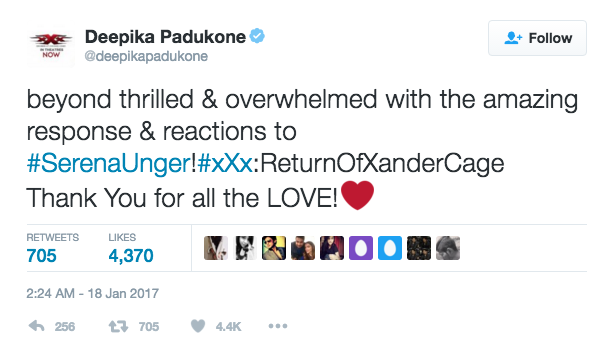