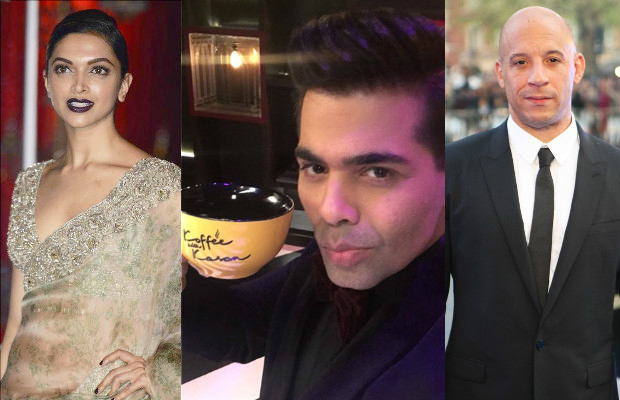 Koffee with Karan is the flavor of the season making headlines for getting a variety of celebs from B-Town. This season of Koffee with Karan, has been braced by many A-listers like the 3 Khans, Akshay Kumar, Anushka Sharma and Kareena Kapoor Khan. It also unveiled to the world what Shahid Kapoor’s wife Mira is like.

Now that the Hollywood hunk is coming to India to promote his film, this scenario seems more probable. A source was quoted saying, “Karan Johar has currently taken a break from the shoot, and will resume only after Jan 11. With Vin coming to India on January 12, there is a possibility of him shooting with the Holly hunk and Deepika.”

The official itinerary of Diesel’s visit has no date for KWK, but it wouldn’t be surprising if Deepika manages to convince him to take a couple of hours and shoot for the show. The same way she managed to get him to agree to promote the film in India in person. Anyway, she is yet to film her episode on the show.