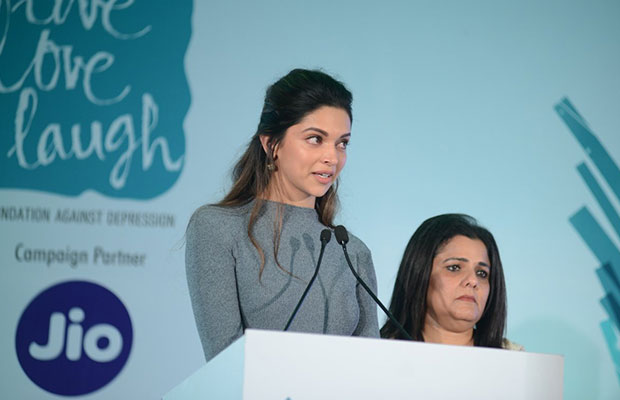 Deepika Padukone is one of the most successful actors in Bollywood today. She is slowly making her space in garnering international recognition too.

The 30 years old actress, who has herself fought depression, was recently seen addressing a crowd at Delhi on World Mental Health Day at the launch of a nationwide campaign to bring awareness about psychological disorders.

While sharing her personal struggle, tears rolled down her cheeks while she spoke. “Two years back, my family had come to see me. They were about to leave and I was all alone in my bedroom, curled up. My mother walked in and asked if everything was okay, I said yes. She asked again if it was work or something else that was bothering me, I said no. She asked me so many times that I felt myself choking and I broke into tears,” the actor recollected.

Wiping her tears and composing herself, she added “I want to tell my mother that if it wasn’t for you, I wouldn’t be here. Thank you for being with me all through the way. Thank you to my sister, my father and friends who supported me immensely.”

Deepika has founded an organization called Live Laugh Love that aims to create visibility and awareness via digital and traditional media channels to take the message to a larger population and help in eradicating the stigma attached to depression.

She also launched social media campaign “#DobaraPoocho” (ask again) through her foundation. “In the times we are living today, we have become so competitive, which is a good thing, but we have become extremely insensitive too. Through this campaign, I dedicate this to people who have survived depression, people suffering through it even now and urge the society to become more sensitive.”

She added that the day we lose the stigma attached to mental illness, half of the battle will be won. “If there is hope, there is a way.”